Madagascar Wiki
Register
Don't have an account?
Sign In
Advertisement
in: Episodes, Episodes focusing on King Julien, The Penguins of Madagascar Episodes 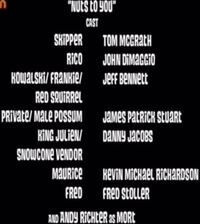 Fred seeks financial advice from King Julien when he stumbles upon an oak tree loaded with acorns, but the Red Squirrel has his own plans for the loot.

Thanks to a mishap from the Penguins' training exercises, Fred happens upon a jackpot of acorns which is the equivalent of gold to the small animals that live in the park. King Julien and his subjects attempt to teach the frivolous benefits of wealth to the simple squirrel. Unbeknownst to the hapless mammals, the Red Squirrel seeks Fred's fortune to buy minions for himself to further aid in his schemes.

After a hip-hop dance party in the park, Julien and Fred are kidnapped by the villain in order to extort the information on the whereabouts of the acorns. Upon witnessing the abductions, Maurice and Mort enlist the reluctant help of the penguins to save the two hapless mammals.

In the Red Squirrel's hideout, Julien and Fred are being questioned and thanks to their own stupidity, frustrate the one-eyed squirrel. Julien and Fred try to escape, but end up getting distracted by an acorn which then springs a trap, thus recapturing them both. Meanwhile, the penguins and lemurs are having trouble with the surrounding defense system. Thanks to Mort's innocent advice, they're eventually able to penetrate the base.

Upon the infiltration, the rescue team is quickly immobilized by, apparently, the same metal wall that appeared in "Dr. Blowhole's Revenge". As the interrogation of Julien and Fred continues, Skipper realizes that no harm will come of them giving the Red Squirrel the acorns. Knowingly, Julien and Fred do indeed mess up the deal they had made with the Red Squirrel, leaving the villain acornless and as a result with no minions.