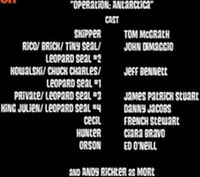 Private forms a friendship with a young leopard seal pup named Hunter, who sets out to help her get back to Antarctica.

After the penguins took down Cecil & Brick, Private finds Hunter, a young leopard seal pup, is accidentally brought to New York inside the fishing nets of Antarctic poachers Cecil and Brick. Though fearful of her at first, after he rescues Hunter from a fish-processing hopper, Private asks the other penguins to help return her to Antarctica.

Though Hunter presents herself as a non-penguin-eating "fishetarian," the others fear her predatory instincts and decide to help her only as far as launching her from the HQ into the East River with the instruction "go south." Not wanting Hunter to have to travel to Antarctica alone, Private launches with her, forcing the others to have to follow by submarine. In Antarctica, a group of leopard seals led by Hunter's father wishes to eat Private, but he is quickly declared off limits after Hunter tells of Private saving her.

The other three penguins (and Julien who snuck inside so he could some rest inside the torpedoes), however, are slated to become a meal after the seals attack them shortly after Private and Hunter escaped into the water tunnel & a seal breaches their sub by cracking the windshield & left them for dead. Hunter and Private try to explain that seals and penguins need not be predator and prey, but the message is lost when Hunter shows off a friend move she and Private had done together involving shaking Private in her mouth, which is misinterpreted as a hunting technique, where Kowalski explains that thrashing penguins side by side was the way of tenderizing the meat before eating the penguin & Kowalski says that all she'd proven was she was growing out of her pup years & was beginning to crave penguin flesh & she was just a natural born carnivore.

After Julien gave her some advice and stopped her from feeling sad that she is not understood, Hunter, along with Private and Julien, who had been a submarine stowaway, rescue the other penguins, though the hungry seals pursue. But when Private saves Hunter's father from falling off a ledge in the process, he accepts that natural instincts are not everything.