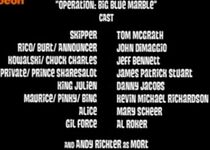 A toxic substance is emitted from the penguins' food-making machine, and it endangers the entire planet.

Kowalski comes up with an idea for a machine that combines 2 of the most perfect foods in existence: churros and fish- thereby creating a new super food named "Furros". Skipper assumes it would explode at first, but Kowalski claimed that its only downside is toxic waste disposal, but Kowalski routes the waste to go straight to the volcano in the Lemur Habitat. However, as the Penguins consume more and more of their new food, along with the more waste escaping the volcano, the atmosphere begins to go haywire along with a strange climate and precipitation change.

To figure what is happening after King Julien accuses the Penguins of upsetting the Sky Spirits, Kowalski sends Private to space, where Private encounters a giant bubble of the same blue gas that came out of Julien's volcano and tells the others that it wasn't a satellite from Dr. Blowhole, (which Kowalski tells Skipper that Blowhole is still incapacitated in Coney Island, thinking his name is Flippy) Kowalski then tells Skipper that the ones responsible is themselves and they must destroy the bubble to save the planet. Kowalski also explains that at their consumption rate of the food they've eaten, the bubble's power will cover New York State in 1 hour, the United States in 12 hours, the world in a day and the Milky Way Galaxy in 6.7 million years (which didn't seem important to the rest). Skipper refuses to accept Kowalski's claim and says that they can and will not do anything about the climate change and stop producing their dream food.

Kowalski, Rico and Private ascend in fighter rockets to space & fire missiles, but instead of destroying the toxic bubble, the missiles interact with it and supercharge the bubble. The Penguins land in Penguin One, but they speed straight into the heart of the bubble & run out of fuel, thanks to the Lemurs who helped Skipper launch the rocket, where Kowalski says they will sit there with 3 possible ways they will die (1. Until they run out of oxygen or (2. Until the bubble's poisons disintegrates the spacecraft, destroying them, but then Private cuts him off before he could finish, telling Kowalski to pretend that he ever asked) However, Kowalski discovers that they can regain fuel using the Lemur's gas attacks from consuming the food that caused the whole mess. They speed straight out of the bubble, which explodes and they start to head back to Earth by reentry.

Community content is available under CC-BY-SA unless otherwise noted.