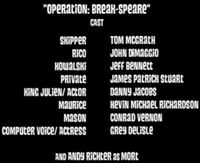 A sleep deprived Skipper tries to negotiate a treaty with the lemurs, while Private begins secretly watching Shakespeare's plays in the park and reciting it, which makes Skipper think he is a traitor.

Nights-long partying by the lemurs prevents the penguins from getting a proper night's sleep and inflates Skipper's already high level of paranoia to ludicrous levels, which Kowalski calls LPICI (Lemur Partying Induced Chronic Insomnia). Meanwhile, unbeknownst to the others, Private repeatedly attends plays of William Shakespeare's works in the park and later quotes from them at random moments, including during "Disturbing the Peace Treaty" talks, at which the penguins and the lemurs attempt to work out their differences so Skipper can actually get the sleep he needs.

Now suffering from sleep deprivation, Skipper soon begins to misinterpret Private's archaic language usage as enemy code & believes Private is working with an enemy since his first absence for "Lights-Out" & orders his detention (being sellotaped to a barrel), and proceeds to investigate the "enemy encampment" in the park with Kowalski and Rico. He engages in a sword-fight with an actor. The operation doesn't go well because Skipper keeps falling asleep. In detention, Private implores the lemurs to help him interrupt the play (which they only do when Private tells Julien about King Henry V, who thens rips the sellotape off, causing Private to scream in pain). In doing so, Skipper shouts angrily at Private and moves his sword to attack him, but he slips on a barrel and the sword flies into the air toward Private. He appears to be fatally stabbed, with Skipper showing immense remorse for what he's just done to Private, but it turns out it's a fake sword. Eventually, Skipper's sleep depravation ends when he sleeps through a play the others, including the lemurs, watch.