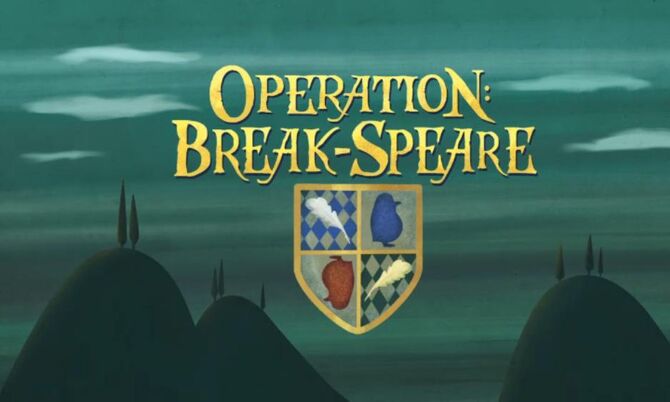 Skipper: (The penguins are lined up in the HQ. Kowalski is wearing a nightcap and Rico is holding a teddy bear. Skipper looks tired, with bloodshot eyes.) Men, we live as a unit, we fight as a unit, and we sleep as a unit. (Yawns) It's been a rough week in the battle for shut eye.

Kowalski and Rico fall asleep and bump into each other, startling them awake again.

Kowalski: (Sighs) The lemur auditory assault has been merciless! (Rico squeezes his teddy bear and mutters menacingly in agreement)
Skipper: But tonight, it's dose or die. Arm yourselves for lights out.

Kowalski: Uh, nightcap, Skipper?
Skipper: Good point. Warm milk puts me out like a teeny, tiny, little baby.
Kowalski: I mean, that's not your nightcap. That is.

Skipper's nightcap is seen burning on the stove top, and Skipper saves it, blowing the smoke off of it.

Skipper: Okay. Maybe I'm not 100% sleep-shape, shipwise. (Puts the nightcap on and briefly falls asleep, and pushes a button, turning off the lights.)
Computer Voice: Commencing Lights Out Protocol. (The penguins' HQ's windows close themselves.)
Skipper: (notices an empty bunk and panics) Whoa-whoa-whoa! Where's the Private?

Actress: (Acting in a Shakespeare play with Private watches) For my kind offer, when I make courtesy, bid me farewell. (Bows, and the audience applauds)
Private: Oh, bravo, bravo!

Private: Lights out! (Private frantically heads back for the zoo).

Private slides back into his habitat just in time as the food bowl locks up, land on Skipper in the process.

Private: Reporting, Skipper. Sorry, I was--
Skipper: Fraternizing with the enemy! Is that it, Private? Have you finally flipped on us?
Private: No, Skipper, never! See, the play's the thing. I was--
Skipper: (smacks Private with the frying pan) SAVE IT! I'll ring the answers out of you in the AM! For now hit the bunks! (throws Private in bed and gets into his bed)
Private: (to Kowalski) What's up with Skipper? He seems a bit crabby and paranoid... I mean, you know...more than usual.
Kowalski: Lemur Party-Induced Chronic Insomnia! Commonly known as 'LPICI'. At least by me. Earlier tonight, he spent an hour interrogating the coffee machine.

A flashback reveals Skipper threatening the coffee machine by sticking his face up close to it.

Skipper: Give me your dark bean-y secrets!

King Julien: (stands on his boombox) Ten of the clocks! I declare Lemur-morial Day's Eve festivities open for partying!
Mort: Oooh, let me!

Mort turns on the boombox, and the music plays loudly.

The volume of the Lemurs' music is so loud, it knocks Skipper and the others out of their bunks.

A flashback reveals that on Monday Night, the Lemurs dance to a Big-Band-themed song, as Skipper suddenly appearing from behind the wall in the background.

Skipper: (shouting over the music) BE QUIET!!!
King Julien: (continues dancing) Hey, this is New York! The city that never sleeps!
Skipper: (still shouting) BECAUSE OF YOU!!!

Another flashback reveals that on Tuesday Night, the Lemurs dance to a Country-themed song while the Penguins scowl angrily at the Lemurs, except for Private, who is blissfully dancing along with them. Kowalski nudges him to make him regain focus causing Private to scowl at the Lemurs too.

Another flashback reveals that on Wednesday Night, Kowalski holds up a giant loudspeaker that's blasting penguin mating calls at the Lemurs, which is being partially drowned out by the Lemurs' boombox. Maurice seems a bit uncomfortable hearing the mating calls while the other lemurs are perfectly fine.

Kowalski: No effect, at least, not on lemurs.
Rico: (swooning) Ooh, How you doin'?
Skipper: Recommendations for next move?
Private: (reciting Shakespeare) To be, or NOT to be, THAT is the question--
Skipper: We need action, not waffling! Rico!

Skipper: I like the way you think, soldier.
Kowalski: Perhaps we should try diplomacy? The art of solving disputes by negotiation or other non-military means. (Private nods in agreement)
Skipper: Mhmm, great. Why don't we just have a quilting bee while we're at it?
Kowalski: I know it goes against every bone in your thermal-regulated body, Skipper, but the diplomatic approach has been known to work... Except when it doesn't. (frees Private from the torture device)
Skipper: (Yawns) Alright. Anything to get a few dozen winks...

Mason: (slams a squeaky hammer on table in zoo shop) At the behest of the penguins, we call these peace treaty talks to order.

Phil elbows Mason and corrects what he said via in sign language.

Mason: Ah, quite right Phil. That is ' Disturbing the Peace Treaty '.
Julien: Thank you, Thank you. As king, I will speak first. I shall give to you... Uhh... Mort. And you... shall... you know, go away.
Mort: OOH, I'm a bargaining chip, YAY!
Skipper: We demand a 10:00 curfew!
Julien: No prob--uh, HEY?! 10:00? 10?! Oka-We have not even begun to rock out by then! Ha-ha, I laugh at that.
Private: Oh, Ruffians! That will swear, dance, r-r-r-rebel the night! Hours filled up with riots, banquets, sports--
Skipper: Private! Knock off the old timey yakedy-yak! We're negotiating!
Private: But-but Skipper, it's--
Skipper: Time for you to be confined to quarters! On the double!
Private: (depressed) Aye, my lord.

Private: And so, from hour-to-hour, we rot-and-rot... (sees one of the zoo's clocks and gasps) Oh goody! I can still catch the show!

Private eagerly slides back to the Shakespeare play in Central Park.

Later, Private returns from the play.

RETURN TO
THE END OF THE EPISODE
Community content is available under CC-BY-SA unless otherwise noted.
Advertisement