Madagascar Wiki
Register
Don't have an account?
Sign In
Advertisement
in: Episodes, Episode focusing on Marlene, The Penguins of Madagascar Episodes

Driven to the Brink 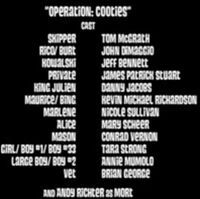 The penguins and King Julien believe Marlene has the cooties after overhearing school children.

Before the Penguins start their sumo training, Marlene comes in the Penguins' Habitat with some leaves which she informs are "organic moisturizers". She rubs it on herself then Private, then Kowalski, then Rico until Skipper tells them to start training (while Rico eats the leaves). Alice tells the kids to go back to the bus while Marlene jumps in the water so she can be undetected.

Meanwhile, at King Julien's habitat, King Julien observes at a bunch of kids running from a girl who claims to have "cooties'. When King Julien raises his feet in terror, Mort hops and hugs them, but King Julien throws him away. At the Penguins' Habitat, the Penguins are training SUMO style, but while Kowalski and Rico charge bellies at each other, Mort is squashed between them (which Private calls a penalty, although he's not sure for who). Maurice and Julien are seen taking some of the Penguins' tools and weapons, but were spotted. Maurice explains that the humans are spreading something called "cooties". When all of them observe the kids, they becomes convinced. They found Marlene in Burt's habitat with Marlene scratching Burt. Marlene then itches and the others claims that Marlene has the cooties. The others panicked, especially Julien. While King Julien panics, the Penguins hide in their habitat in a split second (not-seen). When King Julien informs a plan, the Penguins were not there then Marlene comes in. Marlene was asking Julien a favor, but King Julien panics slightly, avoiding getting touched. He jumps on Maurice, sacrifices Mort to Marlene by getting touches and went off to find help. Marlene releases Mort and leaves. Mort itches, Penguins hack him in their habitat with a rope, raised the alarm and placed Mort in a box to avoid getting cooties. When Private, Kowalski and Rico panic that they were infected when Marlene visited them earlier and run around, Skipper slaps them to snap out and slaps Kowalski's oxygen mask off. Kowalski takes Rico's and Rico uses a goldfish bowl to cover his head. Since none of them are itching, Skipper informs that none of them have cooties until Private itches and is put in the box (dropped and sat on Mort).

Maurice and King Julien ask the gorillas for help until Marlene comes in. Maurice and King Julien run in terror while Marlene itches at the tree, making the gorillas stand back in terror. While the chimps were playing checkers, King Julien jumps in, ruins the game and tells them that Marlene is coming. Marlene comes in so King Julien, again, runs in terror. Marlene asks the chimps to scratch her back, but Mason and Phil refuse to get touched by cooties and Marlene then realizes about it. At the Zooveneir shop, King Julien piles up a pile of animals dolls and itches, meaning he has the cooties.

Meanwhile, in the Penguins' Habitat, the clocks ticks with Kowalski and Rico performing reacting movements from each tick as they try not to scratch. Kowalski itches his beak and is put in the box (just like Private, he sat on Mort when he was dropped in). While Skipper talks to them, Rico secretly vomits out a back scratcher, a rake and a cactus to scratch his back and throws it away when Skipper looks back at him. When Private and Kowalski put up a mirror and show that Rico is scratching his tongue with the cactus, he is spotted and is put in the box (but instead of seen being dropped, the scene shows it was getting full as Private asks the others for a toe scratch). As Skipper reports on Skipper's log, Marlene comes in and asks Skipper if he will scratch her back. Marlene chases Skipper (while Private appreciates his toe scratch) then Skipper uses a bomb to mist the place and crawl away, but Marlene touches him. Skipper believes that now he too is infected and tries to get in the box to avoid Marlene. Marlene grumpily leaves the habitat (and scratches her back on the wall before 'fully' leaving).

At her habitat, Alice spots Marlene itching frantically, dons a quarantine suit and grabs her. The Penguins (with Skipper, who has got in) hear Marlene scream and jump out (with Mort squashed who then scratches his itch). The Penguins are spotted itching and are taken along with Marlene. They are then placed in an oatmeal bath. Skipper tells Marlene that he owes her an apology one day. A zookeeper informs Alice (and by extension the others) that the leaves Marlene had earlier were poison ivy, Marlene's so-called moisturizing plant. Marlene owes the others an apology as Private informs they should tell Julien about the poison ivy, but Skipper would rather relax.

At the Zooveneir shop, King Julien, Maurice and the rest of the zoo animals, except Mort, itch badly while King Julien screams, "Curse... you... COOOOOOOOOOTIEEEEESSS!"