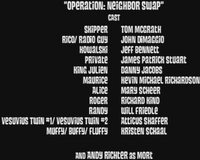 The penguins, annoyed by the lemur's constant music, plan to get them transferred, but things soon spiral out of control.

Recently, the Lemurs have been playing loud rock music, and for the Penguins it has rapidly become unbearable. They arrange to move the Lemurs into the Petting Zoo to suffer at the grabby hands of sticky-fingered children, and at Private's suggestion, the more reserved Roger is moved in. Alice's co-worker calls her over the radio inform her about the transfer on the zoo computer but is stopped in mid-sentence when Alice reminds him that he's questioning the same computer that cashes their pay cheques.

After their initial surprise, King Julien and Maurice soon take to their new habitat, with the resident bunnies admiring Julien's tail and happy to do much of Maurice's work - since there are more of them, they can share the chores. Mort, on the other hand, is extremely jealous that Julien allows them to massage his feet.

Back in the Lemur habitat, Roger finds that there just isn't enough water for him. The Penguins offer to share their pool, but rapidly discover that as a neighbour, Roger is too much of a good thing. Finally, they decide to switch the habitats back.

When Julien refuses to leave, the penguins decide to forgo his permission by using the zoo computer. However, Julien had anticipated their move and unleashes his bunnies on them. To the penguin's amazement, the bunnies' determination to protect their king makes them able to subdue them with hard martial arts tactics.

The next day, while doing reconnaissance on Julien, Randy the sheep walks up to suggest another way to get Julien back: by biting. Since Julien isn't a biter, the penguins suggest the Mort do the job to get them switched back. The perfect target is approaching, too - the bullying Vesuvius Twins. Unfortunately, Mort's teeth become wedged and their window of opportunity is closing quickly.

As the twins close in on Julien, the bunnies offer to protect their king. However, Julien dismisses this, assuming the twins are bringing him gifts. He climbs all over them, taking their snacks and drinks and scaring them off. The scene then cuts to Alice, apologising to Mrs. Vesuvius over the unexplained presence of the lemurs in the petting zoo, blaming the computer.

Julien despairs to be back in his old habitat, but Mort is delighted. Meanwhile, the penguins express relief to be rid of Roger, and tell him that he can still visit, but to 'call first'. Of course... neither habitat has a phone.