Madagascar Wiki
Register
Don't have an account?
Sign In
Advertisement
in: Episodes, The Penguins of Madagascar Episodes, Episodes focusing on Private 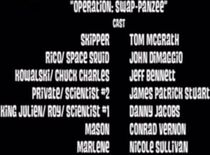 NASA intends to send Phil to the moon but the penguins believed that a penguins show go to the moon instead of sloppy monkey like Phil. They then trick NASA to end up sending Private instead, and now the rest of the penguins must work to get him back home.

The Space Agency intends to send Phil to the moon. In the opinion of certain flightless waterfowl, this important mission would be much better served by sending a flightless waterfowl instead. Private proves to be best suited for the trip (believe it or not) and with the help of a clever monkey suit disguise, he ends up on the moon. His round trip is downgraded to one-way, however, and the other birds can't monkey around if they hope to get him home again.