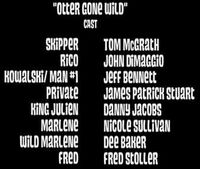 When the penguins decide to go the park for snow-cones Marlene and King Julien tag along. However, when Marlene goes outside of the zoo for the first time in her life, she goes wild. She attacks the penguins and kidnaps Julien.

Julien thinks that Marlene was going to hold him for ransom until she begins staring hungrily at him and he thinks she wants to eat him. However, Marlene begins to hug and kiss Julien, & he is first flattered, then he is a bit freaked out as she was scaring him a little. Skipper and his companions attempt to find Julien and they find Marlene snuggling with Julien.

However, before the penguins can do anything to restrain Marlene, she grabs Julien and runs to the top of Cleopatra's Needle. The penguins take four remote control planes in order to get both Julien and Marlene off the obelisk, but Marlene manages to take out Private, Kowalski, and Rico, leaving Skipper the only pilot in commission.

After avoiding Marlene's swipes, Skipper knocks her and Julien off, lowers them to the ground, and cages Marlene. As they discuss how long it will take Marlene to revert her old self once inside the zoo, she suddenly returns to normal. Kowalski asks if she remembered anything after leaving the zoo and she says she doesn't.

Rico and Private begin to mess around with Marlene's transformation by pushing her cage in and out of the zoo, which proves that once she passes a certain pole that separated the zoo from the park, she would go wild. Julien then approaches Marlene to talk about her infatuation while she was wild, but she rejects him when he asks if she remembered being in love with him.

Julien claims that Marlene's just playing it off. He runs away crying. Skipper understands what he means and he and rest of the penguins walk home, leaving Marlene in the cage, wondering why she was in the cage & asking if they were originally getting snowcones.