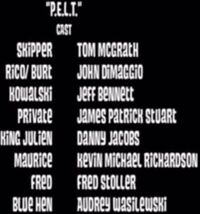 Skipper must prove he can still be a leader when his strength starts to decline.

Skipper attempts to break his record on the obstacle course, but fails as he comes tenths slower than ever every time, worse than the last. Skipper decides to do P.E.L.T. (Physical Endurance Leadership Test) to prove he is a leader. Meanwhile, Kowalski takes over as "Commander Kowalski" and begins using a binder of missions, which involve stuff such as saving King Julien from under the clock tower bell, cutting off the metal parts of the wall in Burt's habitat to free his trunk and freezing Marlene's pool to drain it (which Skipper observes while searching for Steps One, Two & Three of P.E.L.T.) Skipper however, believes he'd failed at the tasks and when he meets Kowalski and the others, he quits the team and requests Rico to smoke-bomb him. However, just as Kowalski answers Private's question on what happened, the three are caged and the Blue Hen grabs Kowalski's Freeze Ray and freezes Rico before he can regurgitate a stick of dynamite. She revealed that she was behind all these recent events and states that not even Kowalski's swagger will stop her. Kowalski attempts his flirtatious swagger, but the Blue Hen resists.

Bringing them back to their HQ to reveal her plans via slideshow, she claims she'd set everything up, all starting with malfunctioning the stopwatch and then, putting Julien under the bell (after all, he wouldn't just get stuck under a bell on his own, though Kowalski frantically shouts that it was Julien after all), tying Burt's trunk and flooding Marlene's place to the point Skipper would leave and she'd capture them. She says she'd freeze the zoo and become the star attraction as she was the only one left, become famous for being famous and become the next senator for Delaware, which Private interjected that last time she'd planned to be president, but she claims she's being more realistic. She freezes Kowalski and Private and leaves to freeze the zoo, Skipper appears only a few seconds after she leaves as he came back for his mug. Just as he's about to leave, he notices the other penguins are in ice cubes, he uncovers Private's face and Private tells him it was an ambush. Skipper goes out and attacks the Hen in the Lemur Habitat and cuts his way through every blast of Antarctic coldness in the freeze ray and manages to freeze the Hen. The other penguins spend their time recovering from hypothermia by the ice cubes in a large flat pan of hot water while Skipper congratulates himself, drinking fish coffee on top of the frozen poultry.