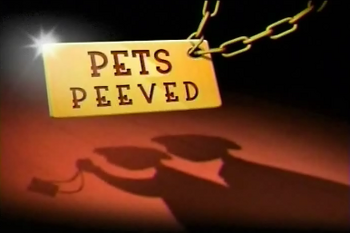 Julien is sleeping until he smells something and begins jumping around in excitement waking up Maurice.

Maurice: Umm, your Majesty.
Julien: Look Maurice, I've been visited be the gold fairy.
Maurice: The gold fairy?
Julien: You know, the winged pixie the shiny things behind.

Mort lifts up his blanket.

Shows a laser targeting at all the mirrors.

Skipper: Space laser counter mission, Rico, bend that detonator away for the HQ swaq to the you-know-who habitat.

Julien blows his mirror then whips it. Rico does an evil laugh.

The penguins leave their habitat.

Skipper: Clear the line of fire Marlene unless you want a pipe steam golden laser cakes.
Marlene: Golden laser... no, guys that's adopt-a-critter signs.
Private: adopt-a-critter?
Kowalski: Now your just making up words!
Marlene: No, guys they did this back at my old aquarium. Rich people give money to the zoo and take selected animals.
Skipper: So it has come upon us. Well played zoo overload.
Marlene: Wait what...

Mason and Phil walk up to the penguins and Marlene.

Mason: Yes disturbing indeed
Skipper: Explain your armanis tone Primate.
Mason: It has seem that over 70% of the zoo has been adopted by the Vesuvius family.

The camera goes to the sign with horror music and thunder clouds.The penguins gasp in horror.

The Vesuvius twins come out of their limo (while Skipper's voice is herd).

The Vesuvius twins walk around the zoo. Pinky runs but is knocked out by a tree, the chameleons hide, Bada grabs Bing who grabs Mort.

They toss a lollipop at him, then they toss candy floss at Burt.

Mason grabs an newspaper protecting both the chimps and the penguins.

Vesuvius 1: I believe you'll find our proposal quite fair.

Alice looks at the paper.

Alice: Crayon?! I don't read crayon, give me the short version.
Vesuvius 1: Being in our family adopted 70% of this zoo. My colleague believes that we are allowed to take selected animals.
Vesuvius 2: To play!
Alice: Yeah I got a Rino to hose down kiddy's like you so why don't you just...
Both Vesuvius: LAWYER TEAM Activate.

Lawyer 1 knocks down the door, Lawyer 2 busted the wall and lawyer 3 breaks the ceiling, knocking Alice. When she gets back up each lawyer holds a piece of paper.

Alice: Law suit, fanantol ruined, I lose my job. Fine 2 animals, small ones and you (points to Lawyer 3) pay for my ceiling.

Both twins laugh evilly as Lawyer 2 drops a smoke bomb. Lawyer 1 picks up the door he broke, Lawyer 2 busted another wall, however Lawyer 3 is stuck.

Skipper is in a happy mood, touches a butterfly and has his fish in his mug when a cage fell on him.

Julien grabs a spatula and splats the butterfly Skipper touched earlier, when a cage also fell on him.

Julien: Cage comes up what now.

The butterfly Julien splats flies away (it was not hurt though).

On the other side.

Maurice and Mort look confused. Both Skipper and Julien are covered.

Julien starts screaming in horror until the it's revealed to be a huge TV.

Julien: I can't believe they make a TV that big.
Skipper:Ringtail the Vesuvius can smell fear. Stay strong and never let them take you dignity.
Julien: A how please, I eat dignity for Brunch, with a breakfast portion of brave and a lunch portion of RRAWWW.
Vesuvius 1: Gladiators! today you fight for fame (has Julien a mallet), for glory (hands Skipper another mallet).
Skipper: I don't think so.
Vesuvius 2: And for surgent cenered softband.(Julien smiles).
Julien: OAA so shiny.

They open the cages and drop the soft band.

Skipper: Not I psychopath you may have my freedom is...

Julien smacks him from behind.

Julien: Give the shiny arm bangle give me.

Maurice: So what's the plan.
Kowalski: The Vesuvius live in the posh penthouse, but I detected a entry point right (points to the computer) here.
Mort: I am coming King Julien. (smack the screen thinking it was easy) This enter point is to weak.

Vesuvius 1: Who's a good boy, who's gonna get the shiny toy.
Julien: I hope it is me.
Skipper: Ringtail remember DIGNITY!
Julien: Dignity don't sparkle in the gold.

Julien: Suck it up LAZY booty, you've got to be IN IT TO WIN IT!
Vesuvius 1: Wow
Vesuvius 2: Violence is my favourite!

Kowalski: Right it should be easy to make it across...
Mort: I am coming King Julien!

Mort, who thought it was EASY AGAIN falls.

Maurice: NO!
Kowalski: ... with a grappling gun.

Rico regurgitates a grappling and throws it at the place where Mort FELL.

Julien is eating rotten food, then sniffs something and throws it at Skipper.

Skipper: You are a spineless slab of push-over Jim.

Vesuvius 1: He ate it.
Vesuvius 2: Totally ate it.

They pass him a golden belt.

Julien: So(BURPS)shiny.
Skipper: Trouble choking down your on pride Ringtail. Let that be less...

Vesuvius 1: We just made a squirrel thing throw up on a penguin.

A computer comes on showing the other penguins and the other lemurs.

Computer: Warning unauthorized personal. Please press for lock down.
Vesuvius 2: They must be like homing penguins or something. They're coming right to us.
Julien: No. Okay, I think I'm okay now.

Then start spewing on Skipper again.

Private: Skipper?
Skipper(dressed as a girl): Don't ask and DON'T COME ANY CLOSER, it's a trap. Rico I need...

Mort burst through everybody!

'Mort': I AM COMING KING JULIEN!

Kowalski(angry): WHY DID WE EVER BRING HIM?!!!!

Vesuvius 1: Ladies and gentlemen! Welcome to the Vesuvius Brothers' Circus.. of PAIN!
Vesuvius 2: A registered trademark of Vesuvius Enterprises. Don't even think about copycatting, we have lawyers.
Vesuvius 1: Go time!

The room "colour" lights come on.

Maurice hanging upside down on a trapeze getting spanked by a racket.

Vesuvius 2: The bowl of bowling.

Kowalski is getting squashed by the ball.

Vesuvius 1: The ship maker.
Mort: I am not a Licensed PILOT!
Vesuvius 2: And the doomed damsel.

Skipper keeps getting hit by toy trains that Rico and Private are "driving".

However, Julien is DANCING with "his soft-band, glasses and gold belt" with a diaper leash.

Julien: I'm dancing in the big top, booty loves the circus yo.
Maurice: You have got to be kidding me.
Skipper: Ringtail I've got an exit strategy, but I gonna need "your" soft-band.

Julien turns around unhappy and mad.

Julien: What, I've earn this soft-band by hitting you in the back while you weren't looking.
Skipper: Listen you..

Skipper is "hit" by Private.

Julien is angry we he here's the news.

Julien: What such lies, not about the fancy that is obviously true, but this king is pet to NO ONE!
Maurice: Oh year, tell it to that diaper leash your wearing.
Julien: Ha the diaper is fancy, and the shiny gold chain...

His sentence was cut because The Vesuvius 1 pulled the chain.

Vesuvius 1: Hey the squirrel thing stopped dancing.
Julien: Yes I do love the dancing but...

The Vesuvius start pulling the chain.

Julien: My dignity has been stolen, Maurice, for once you are a little right.

Julien: Nobody turns the king into a pet, you can take your chain (throws it at them), your, glasses (also throws) oh and the BELT, I actually like it so I'm going to keep it, and you can TAKE you SOFTBAND (throws it at Skipper).