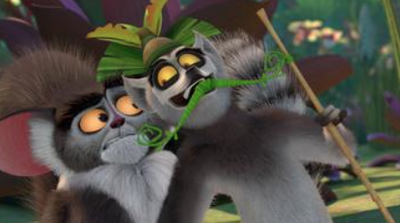 Scene I: The Cove of Wonders

Maurice: Presenting Your Royal Highness, our illustrious King Julien XIII, who drove away the foosa and--

Maurice: Do I really have to say this?

King Julien: Yes, you do really have to say this!

Maurice: Taught us how to dance like no one's watching and love like we've never been hurt, et cetera, cetera... Hurray, everybody!

Lemur: Who are you talking to?

Lemur: You don't even have a radio-- [yelling]

Clover: Roger that, we've got troublemaker causing a disturbance. Bringing him in. Over.

King Julien: Yay! Listen to all the hand-clapping! This is all I ever wanted, to be adored by everybody.

Maurice: People do seem to be digging their new king.

King Julien: Thank you, thank you. I, your king, have decided that in order to keep you all safe, we need a really great navy. I present to you, our fleet!

King Julien: I call her Old Porcelainsides. Uh, she's a her because apparently all boats are girls for some reason.

King Julien: Put your paws together for the captain of this fine vessel, Willie!

Willie: Uh... are we sure this ship is seaworthy?

Willie: Believe it or not, that was my next question. [yelps]

King Julien: Yes, being king is so easy. I don't know why everybody doesn't do it.

Maurice: Well, it's not all fun and games. You have responsibilities now.

Mort: [laughing] Good one! That's a good one! I love it! Why are we laughing?

Maurice: I'm serious. You're supposed to be catching up on current events right now.

Xixi: Good afternoon. As always, I'm Xixi, and this is your news. Mango lovers across the island rejoice. The recent rainfall should mean a great mango harvest this season.

King Julien: Come on, give me the good stuff.

Xixi: Moving on to local gossip.

Xixi: Sources saw Pancho looking cozy as he canoodled with a new mystery lady. Is love in the air?

King Julien: I sure hope so. Pancho needs it.

King Julien: Ooh, "soaring" is a goodly thing for my popularity to be doing.

Xixi: In a recent survey, over 99 percent of the public approve of the job the new king is doing.

Xixi: Wait, what did I say?

King Julien: Do you not see, Maurice? This glass is not half full, it is one percent empty.

Maurice: Ninety-nine percent full is actually a lot better than half.

King Julien: Eh-eh, your so-called "numbers" and "reason" and "understanding of math" are of no comfort when there are lemurs who do not like me.

Xixi: Lemur. As far as I can tell, there's only one.

Maurice: You hear that? Just one. Big deal. Everybody else likes you!

Clover: You're the king. Just make it illegal not to like you. And I will happily enforce that law. I can't wait to see the fear in their eyes as they lie about how great they think you are.

King Julien: Ooh, I can make a law like that?

Maurice: No. Well, I guess, yeah. But you shouldn't.

Maurice: Everybody—and, again, by "everybody" I mean one lemur--

Maurice: Will come around eventually.

Clover: Unless the one holdout recruits more lemurs to his side. This could be the start of a revolution. Think about it. The gnashing teeth. The blind rage.

Clover: We need to stamp this thing out now!

Clover: How long was I out? I didn't hurt anyone, did I?

Maurice: Yeah, instead of worrying about one disgruntled citizen, why not focus on all the stuff you do have:

Maurice: A great kingdom, and an abundant supply of food--

Maurice: Like I was saying, you got a lot going for you. Don't forget that great new ship!

King Julien: This is literally the worst thing of all time that has happened to me ever.

Xixi: Oh, I would've assumed it was having half of your family eaten by the foosa.

King Julien: Ha-ha! Good one, Xixi. But we all know they were sent away to a farm.

Maurice: Yeah. Hey, I've got something that'll make you feel better. Check it out.

King Julien: Oh, fruit on a stick! I feel so much better, Maurice!

Maurice: It's a visual aid I put together. I call it the "Kumquat-ometer." The pole is the kingdom, and these kumquats are all the citizens who like you and the job you're doing. See? Filled all the way to the top.

Xixi: Oh, yes, we do go pretty far back.

King Julien: Which is all the more reason to do what I want you to do instead of what you think is right.

Xixi: Oh, I'm sorry but I've gotta protect my sources. If they dont trust me, the info pipeline's all dried up.

King Julien: Yes, there's no reason for me to be worked up or to make a big, huge, giant deal about this. Masikura!

King Julien: Use your lizard psychic tongue to get inside Xixi's mind and tell me what's inside it!

Masikura: Oh, no, I couldn't. There are nine kinds of ethical--

Masikura: Grape jelly, a funnel, a pair of women's shoes? What did I just see?

Maurice: It was Spring Break, OK?

Clover: King Julien, you're safe... for now. May I have a word with you?

Clover: I've begun doing a little recon, and just as I feared, we're looking at a real security issue.

Maurice: Oh, come on! Because of one unhappy lemur?

Clover: This is a private intelligence briefing.

Maurice: This thing's not soundproof. How private can it be? He's gonna tell me everything later anyway.

Clover: As I was saying, it starts as one. But one bad mango can poison the entire kingdom.

Clover: You don't wanna know. Trust me. That's why I need to interrogate every lemur in the kingdom.

Maurice: Interrogating everyone will cause a panic. Back me up, King Julien. You're doing eenie, meenie, miney, mo in your head, aren't you?

King Julien: Mo! I mean, no.But if I were, I would have landed on Clover. You may go investigate to see if anyone wants to uprise all over me.

Clover: On it! [yelling]

King Julien: Couldn't hurt to be safe. Super embarrassing to get assassinated on the first week of the job. In the meantime, we should get a small group of average lemurs and ask them what they think.

King Julien: And I get to wear a disguise!

Maurice: First off, thank you all for coming.

Maurice: I'm gonna jump right in. Now, if you could improve one think about the kingdom,what would it be, specifically? You, sir.

Ted: Well, if I had to pick one specific thing, I'd probably say... nothing.

Maurice: Hey, that's great! How many people are happy overall with how the new king's been doing so far?

Hector: Hard to do worse than the last few idiots.

Maurice: OK, Hector, I'll go on ahead and put you down for "happy."

King Julien: [disguised voice] Hello, hello. Sorry I'm late. Uh, traffic was a nightmare. Uh, what were we talking about? Our favorite things about King Julien? OK! Uh, let's go around the room and, uh... spitball. Uh, there are no wrong answers.

Hector: I can't be the only one who notices this is just King Julien with a bad fake moustache.

Hector: Nope, we're not doing this.

King Julien: Wait, nobody wants to stay and, uh, chew the fat with Chair Lemur-Table?

King Julien: It's me, Maurice!

King Julien: This is not my real moustache!

RETURN TO
END OF ARTICLE
Community content is available under CC-BY-SA unless otherwise noted.
Advertisement