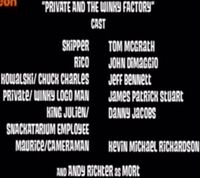 When Private learns that the Peanut Butter Winkies are going out of production, he urges a raid on the factory and Skipper is so impressed he lets him command the mission.

The penguins initate a snack run in the city's convenience store. After finding out that the factory that makes Peanut Butter Winkies is shutting down, the penguins, of course, freak out, especially Private, who refuses to let them shut down the factory without a few more boxes of Winkies. Unfortunately, King Julien eats the last box known to man. Impressed by the passion, Skipper lets Private be in charge of the operation to reclaim the boxes still at the Winky Factory.

From the start, things going haphazardly after Private lets Rico go after Marshmeow-Meows (pink cat-shaped marshmallows), that make him go crazy. The team bind him and keep going with the operation but Rico (still on a sugar rush) kicks Kowalski into some sticky candy that's also being lifted up by a crane prepared to being sat on the rolling band. Private's missing the Winkies and helps Kowalski who then falls into a box of candy corn, which stick to his head.

On the track again, the team is floating on the marshmallow river with Private and Skipper in the lead and Kowalski tries to handle Rico, who hits him with a lollipop causing Kowalski to fall into the river. Private throws a rope to catch him while Skipper takes Rico. They both pull him in so hard he flies right into the wall and falls into a box of pink sugar. Private tells Rico that there will be no more pink marshmallow cats, when Kowalski gets out of the box looking like a big Marshmeow-Meow. Rico starts chasing Kowalski and the the team finds all the boxes of Winkies. But when both Rico and Kowalski get sucked up in a pipe the control desk blows up and everything is sucked up in the pipes. Private has to choose between the team or the Winkies and chooses the Winkies. When he is about to eat one, he feels guilty for letting down his friends and goes after them.

The pipes lead out to the outside of the factory where he finds Skipper and apologizes to him. Skipper says it's okay as long as he learned his lesson. Private says that he learned not to take candy before friends, but Skipper says the lesson is that the leader thing is his job.

Just then Rico is flushed out of a third tube, fatter than ever and complaining of a sore belly. Skipper is just chastising Rico for eating too much candy when Rico starts trying to hack something up, which is actively fighting its way out - and to Skipper and Private's horror and disgust, he regurgitates the clean, but traumatized Kowalski, who turns to them, hissing, "The things I have seen..." On the spot, Rico collapses after saying 'Bad Meow meow."