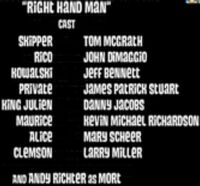 A new animal at the zoo has a dastardly scheme to become king of the zoo.

A crate containing a new animal has been delivered and the Penguins try to find out what it is. Once they opened the crate, Skipper said, "Oh, no, not another one!" then shuts the crate in exasperation.

In the Lemurs' Habitat, Maurice desperately wants to take a break from serving King Julien, but King Julien asks Maurice to reach for his coconut juice, which was only on his throne, yet can't reach it. King Julien changes him mind and wanted a pineapple. Suddenly, the Penguins drop in with a zip vine to report about the new arrival. Before Kowalski can tell the Lemurs who the new arrival is, Private immediately told them that it's a lemur. This lightens King Julien for having a new subject to rule over.

A few minutes later, Alice brings in the cage of the new lemur. She reveals that its name is Clemson. Mort, Maurice, and King Julien jump in front of the cage to greet Clemson. When King Julien mentions that he is the king, Clemson comes out and thought Mort was the king. He then thought Maurice was the king until he saw that a king crown on King Julien. Clemson then bows down to King Julien and worships him. Later, Clemson uses his back as a stair for King Julien to climb to his throne and makes him feel more comfortable by adding a pillow. Later, Clemson is massaging King Julien. King Julien said he's starting to like Clemson. Maurice said he also likes Clemson because he can do King Julien's chores while he finally gets the break he's been waiting. When Mort spots Clemson massaging King Julien's feet, Mort suspects Clemson of being evil.

At the loading deck, the Penguins suspect a crate about to be shipped to the Hoboken Zoo. The Penguins soon start to investigate who will be transferred.

Back in the Lemur Habitat, Mort wakes up Maurice and tells him that Clemson is evil. Maurice wanted to get more sleep, but Mort drags him. They overhear Clemson planning to get rid of King Julien (whom he called "Booty for Brains") so he'll be the king. He laughs evilly as lightning falls appears on the sky.

Back in the loading deck, Kowalski judges the size of the create and removes the pictures of Roy and Burt since they're too large. Skipper sees that the only ones left are the otter (Marlene), the chimps, the lemurs, and the chameleons. Private then adds that they're also left. Skipper starts to yell maniacally because he promises himself that he would never end up in the Hoboken Zoo, at least not alive. While Skipper jumps on Private, swearing that he would pluck out his own eyeballs, Mort and Maurice pop up to tell them that Clemson is planning to get rid of King Julien. Skipper refuses to believe it, but after hearing that Clemson had an evil laugh, he then believes it. When they left to tell King Julien, Clemson fools King Julien that he has a surprise to him at the Loading Deck, saying it's in the crate, which means Clemson was going to take King Julien to the Hoboken Zoo.

At dawn, the Penguins, Mort, and Maurice check the Lemurs Habitat, but see that King Julien and Clemson were not there. Kowalski and Rico thought Clemson was going to incinerate or burn or deep fry King Julien. Private realizes that Clemson plans to take King Julien to the Hoboken Zoo through the crate in the loading deck.

At the Loading Deck, the Penguins, Mort, and Maurice arrive in time before Clemson knocks King Julien in the crate with a crowbar. They try to tell him that Clemson is planning to get rid of him, but King Julien refuses to believe. Clemson then starts chuckling evilly and knocks King Julien in the crate. He drives the loader truck and loads the crate in a van, where the crate will be delivered to the Hoboken Zoo. Before Clemson can shut the opening hatch, Mort kicks him in the crate while Maurice pulls out King Julien with his cane as he retrieved his crown. The Penguins put on the crate cover and Rico regurgitates screws to hold the crate closed. The truck starts running so the Penguins run out as Mort closes the back door and jumps back on the sidewalk of the Loading Deck.

Skipper and Mort give Clemson one more look as he is going to be delivered to the Hoboken Zoo. Maurice expects a "thank you" from King Julien, but King Julien would rather leave it as one of those "unspoken" things between them.