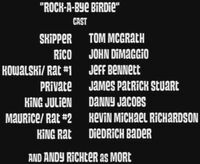 When Skipper is de-aged by one of the Kowalski's inventions, the other penguins must find a way to reverse its effects.

When Kowalski's ray designed to freshen spoiled food accidentally hits Skipper before falling down a storm drain, the leader is turned into a chick. He now possesses the strength, stamina, and needs of a chick, while retaining much of adult Skipper's personality, and is annoyed by the other penguins insisting how cute he is. Skipper yawns, from which the penguins deduce that it is nap time for baby. Skipper doesn't believe it until he falls asleep.

While the other penguins attempt to retrieve the ray, the down-feathered Skipper must be babysat by babysitter, whom penguins need to find to be having a high tolerance of weird things. Julien is in his habitat, looking himself at the mirror and when he sees baby Skipper, he starts adoring him and believes that he's a baby penguin. The penguins decide that Skipper must go by the name "Petey", the penguins' baby cousin, much to Skipper's displeasure.

After the other penguins find that the ray is in the possession of the sewer rats, they are captured by them. Sensing his team is in danger, baby Skipper slips past a sleeping Julien and enters the sewers. Julien wakes up and panics to find out that Skipper's gone, he notices melon trails, so he runs to sewers to save him.

As he arrives, he notices Skipper is in danger, because Rat King is about to throw a brick at him, but Julien sacrifices himself by placing the hit on his booty instead of Skipper (whose eyes are dilated, amazed by Julien's sacrifice). Julien survives. Skipper then attacks Rat King, ultimately defeating the Rat King through quick-thinking leadership – and a flatulent emission called the "Baby Boom".

With the ray back in Kowalski's possession, he returns Skipper to his normal self at the HQ. Skipper happily tells Julien that he owes him, because he saved his life, but Julien still believes he is Petey and he thinks that he has now grown-up into Skipper, much to the latter's annoyance.