Madagascar Wiki
Register
Don't have an account?
Sign In
Advertisement
in: Episodes, Episode focusing on Marlene, The Penguins of Madagascar Episodes 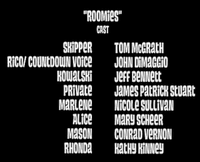 When Marlene gets a new roommate, the Penguins start to suspect she might be a spy sent to steal Kowalski's latest invention, and she enlists their help to get rid of her when she starts acting rude and disorderly.

Kowalski has built an invention with a purpose that even he is currently uncertain of. Marlene enters the penguins' HQ and informs them that she is going to have a new roommate in her habitat and is excited. Skipper's paranoid mind instantly jumps to the conclusion that this new roommate might be a spy sent to steal Kowalski's new invention.

The roommate turns out to be a 1500lb walrus named Rhonda. She is very annoying and disgusting, with little regard for Marlene's well being. At Marlene's request, the penguins break into the zoo office and prepare a freight package to send Rhonda away from the zoo.

Private finds out that the crate is going to a Polar Bear reserve and when he tells Marlene this she has a change of heart.

They travel go to the dock in an attempt to stop the crate from being shipped. Kowalski sees this as an opportune time to figure out what his new invention does. His invention turns out to be an energy cutting blade that Marlene uses to cut the rope attaching the crate to a crane.

When they drive back to the zoo, they put a different shipping label on it. After that Alice takes the crate containing Rhonda away in a truck, Kowalski notices that his invention is missing.

It turns out Rhonda was actually a spy sent by Dr. Blowhole to steal Kowalski's invention - and it looks like she's succeeded.