< Showdown on Fairway 18
View source
watch 01:55
Cobra Kai Season 4 - The Loop
Do you like this video?
Play Sound 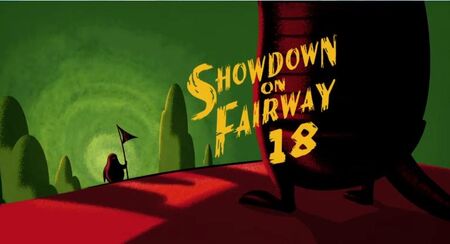 Private: A tumbleweed? In New York?

He fakes ignoring it. The weed then rolls to Private.but he catches it.

Private: Got you, road shrubbery. Why are you following me?

Something comes out of the weed. which is ..... the Amarillo kid!!

Amarillo Kid: Spooked you, didn't I?

Amarillo Kid: That's right, Mr Tux. I'm back, and this time I've come to ASK for your HELP.

Private: NO! Wait a minute. Did you say "help"?

Amarillo Kid: Oh! Sorry, I ain't used to be nicer. PLEASE! You're my only friend, nearby!

Skipper: Oh, no, no! You're not our friend. You're an enemy. Show him, Kowalski.

Amarillo Kid: But I've changed! You all taught me a lesson in... in humility and such. And if you don't help me, they're gonna take my shell!

Amarillo Kid: The G--- the G--- the Gophers... two of the meanest, lousiest two-timers who ever partook of the good game of mini-golf! That's them up there.

Amarillo Kid: I bet 'em my shell and lost! Now they're gonna take it off my back and use it for a guacamole bowl and such. Please! You're the good guys. Aren't the good guys supposed to help, no matter who it is and everything?

Skipper: What a nut. Now, on the upside, this means we can throw a vanquished villain party. 308: over and out.

Skipper: Private's the guest of honor.

Private: But, Skipper, the Amarillo Kid didn't do anything wrong this time!

Skipper: Isn't she? Kowalski, think about it.

Skipper: Soldier, I know your big, soft heart is confused, but sometimes the best way to help someone is to bake a delicious cake celebrating their tragic defeat; maybe, something like a cod glace. Hmm?

THE END OF THE EPISODE
Community content is available under CC-BY-SA unless otherwise noted.
Advertisement