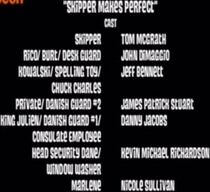 Skipper has been having an absolutely perfect day, so he decides to try and get a hold of his file from the New York Danish embassy so he can clear his name from the criminal history of Denmark forever.

Skipper finds his favorite crossbow that has been missing for weeks, jamming up the TV. He then fires it, the arrow ricocheting around until it puts a mackerel hanging in the rafters in his flipper. Private calls him lucky. As he contemplates this, the news turns on, detailing a boring police chase which turns exciting as there is an explosion. This excites Skipper, who goes up top to taste his snack, only to find it lacks proper taste. At that moment, Kowalski screams for everyone to get out of the way of his out-of-control rocket. Skipper leaps out of the way, getting the fish cooked in the rocket exhaust, making it tasty, while at the same time shorting out the rocket.

Skipper explains to the other penguins that he's pitching a perfect day. It is a rare phenomenon that only happens to athletes and penguin commandos, where every action turns out perfectly. He demonstrates as he kicks the rocket, causing to reactivate and shoot straight at Julien, hitting him in the booty and sending him exploding into the volcano. Then he sends Marlene into Burt's habitat, who is interested in her story of baby kittens. Kowalski asks Skipper if he's sure about having a perfect day. Skipper insists he is, explaining that he had a perfect day meeting the perfect girl once (in the flashback, she resembles Skipper). But as he'd lost her phone number and never managed to call her again, he decides to use the perfect day to break into the Danish embassy to steal and destroy his criminal record, thereby allowing him to return to Denmark. Private points out that they still don't know why he's not allowed in Denmark but he still refuses to elaborate. A flashback shows Skipper beating Hans the Puffin in a fish fight and opening a case to find an open-faced sandwich.

He then outlines the infiltration plan. Kowalski would commandeer a window-washing cart on the outside of the embassy while Private and Rico sneak in a cart full of danishes/cinnamon buns. Meanwhile, Skipper gets in via the sewer. He emerges from a toilet as a man enters the restroom and knocks him out. When the man comes to, Danish security finds him, and he explains his penguin sighting. The security chief reacts to this. In another flashback, the Danes find Skipper with the briefcase as Hans slips away. Skipper then opens the case and makes a sandwich, creating a flash of light that blinds the guards and he knocks them out. He then plants an American flag in the sandwich. The guards all question why they happened to have the same flashback as it ended. The security chief says he knows of Skipper, who caused a great scandal, resulting in the loss of many sandwiches and marches off to find him, little does he know that he's hiding in the restroom garbage can.

Skipper makes his way through the reception without being seen and tricks a guard into letting Private and Rico in and he hides next to the elevator. Private and Rico then roll up with the danishes but the security chief isn't fooled. Though Kowalski fears that the perfect day is wearing off, Skipper orders Private and Rico to expose themselves and lead the guards away as he takes the elevator to the top floor, giving his men directions on how to evade the guards, such as leading them to turn right, count to two and open the first door on the left, which is a supply closet. Now all what's standing between him and his file is the vault doors but he lacks a key. But soon Kowalski's cart malfunctions, preventing him from keeping track of the others' progress. Skipper tells Private and Rico to knock over a jar of lingenberry jam in the kitchen and head for the south stairwell and gives advice to Kowalski on how to hotwire the cart, only for Kowalski to electrocute himself. This gives Skipper the idea to rub static electricity all over himself to short out the lock.

Meanwhile, Kowalski accidentally stumbles into the embassy and bumps into Private and Rico in the stairwell, where the Danes corner them. However, the chief correctly suspects that they are not the animals he seeks. But then Skipper turns up, using his electric body to defeats them all. Then Skipper gets the key from the security chief, unlocks the room and finds the file. When the animals get back home, Skipper briefly allowed Private to look at the file for 6.2 seconds, but there were words Private could not read then Skipper asks Rico to destroy the file and Rico does so and Skipper's name is erased from the Danish crime record.