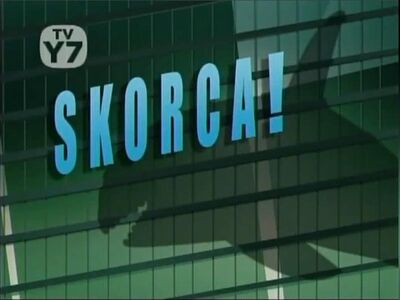 It is night time in New York. In the Penguins' HQ, the penguins are standing in a circle/square and Skipper is pointing to the other penguins and himself as they all sing. As they sing, Skipper switches in pointing at a different penguin.


Penguins:
Penguin, penguin make a wish-y:
Something scaly, cold and squishy,
How's about a tasty fishy?
What kind do you eat?

Skipper picks up a fish and throws it at Kowalski.

Private picks up a fish and throws it at Rico.

Kowalski picks up a fish and throws it at Skipper.

Rico picks up a fish and throws it at Private.
Private: Ook!

Penguins: And don't forget the grenade!
As Skipper finishes singing and pointing at everyone, his flipper ends on Private. Rico then regurgitates a grenade at Private, who screams and throws it out the First Prize entrance in the HQ, where it explodes without harming anyone.

Skipper: And that settles that. Private, you're on aerial recon duty.
Private: What? Alone? All night?
Skipper: And with potential enemies on all sides. It's a soldier's paradise.
Private: Can I bring snacks?

Skipper: All right. Deal.
Private: Yipee! (leaves to get his snacks)
Skipper: But nothing sugary. A recon man needs focus, discipline. The sweet stuff goes straight to the brain.

Private goes to look under his pillow and sees his treat, "Peanut Butter Winkies," all while trying to stay focused to what Skipper said.

Private: Well, yes. Of course. Must be... careful of brain. Okay, leaving now. Don't wait up.

As the other penguins are playing a card game, they are unaware of Private sneaking the big box of winkies through the First Prize exit. After struggling to fit the giant box throught the hull in a hurry, Private manages to get back on track and squeeze through.

On top of the Clock Tower, Private is seen pacing and looking out through a pair of binoculars.

Private puts the binoculars away and eats a peanut butter winky. Then resumes trying to remain focused.

Private then resumes pacing and looking through the binoculars, but then looks at the winkies, losing focus again.


As time passes, the entire box of peanut butter winkies is empty. Private is now in a sugar rush and is acting hyperactive and energetic, speaking really fast and playing with the binoculars like a toy.

Private: TOO MUCH SUGAR. WHAT DOES SKIPPER KNOW ABOUT SUGAR? I ATE SUGAR AND I'M THE BEST RECON MAN EVER! I SEE A FIRE ENGINE!! (starts making noises like a fire truck until looking through one eye of the binoculars) ARRRGH, I'M A PIRATE! WOW, A CATERPILLAR! MY NAME BACKWARDS IS "ETAVIRP!" WHAT'S A "VIRP?" IS IT SUGAR? I LOVE SUGAR!!!

Acting hyper, Private starts swinging around the binoculars while looking through them at New York. Suddenly, he sees a giant orca flying through the city and behind a building, immediately snapping Private out of his sugar rush.

Private: What? No. No, that can't be! No, it must be sugar playing tricks on my eyes. (slapping himself) Out, sugar! Out, out, out! (stops) Much better.

Private resumes looking through the binoculars at the city, but again he sees the giant orca flying past a building.

Private: Oh dear... I really should tell someone about this.

Shortly after seeing the giant flying Orca, Private is seen running through the zoo, screaming at the top of his lungs while flailing his arms as he discards of the binoculars.

Private: NO ONE IS SAFE!!

Private runs by the Chimpanzee Habitat, waking up Phil and Mason.

Private: THE END IS NEAR!!

Private runs by the Otter Habitat, waking up Marlene. Private's screams also wake up the Penguins in their HQ.

Skipper: What in the name of Gandhi's nunchucks?!

Private runs by the Lemur Habitat. His screaming irritates Julien.

Julien then hits Maurice and knocks him out of the bounce house. As the other so many animals crowd around the Zoo Food Court, Private is now seen running around in circles on a table, still screaming as the penguins show up.

Animal: What's going on?
Private: NO ONE IS SAFE!! THE END IS NEAR!!
Skipper: Status report, Private. What's out there? What did you see?

Private continues to scream and run around in circles hysterically. Fed up, Skipper smacks Private in the back of the head, knocking him down. Private gets up and regains his composure from what he saw.

A flash and crack of lightning accompanies Private's reveal of the flying orca.

Kowalski: Ooh! The killer whale, deadliest predator in the sea!
Bing: Yeah, that's gonna be a real problem there— (angrily) in the middle of the zoo!
Bada: Bada-bam, meeting over.

The other so many animals prepare to head back to their habitats, looking disappointed and angry. They are then stopped by Private.

Private: No, you don't understand. This orca was gigantic and it—it came from the sky!

This description of the orca now causes the so many animals to gasp in shock and fear.

Everyone looks at Julien.

Julien: That is what the cool people will call it now, because we take two words and we make them one, which is so hip, you know: SKORCA!

A crack of a lightning bolt accomplanies him. Julien then screams and hides behind Bing's arm.

Julien: Who can be safe from the terror that swims the skies? Nobody! All who agree, please vote by getting panicky... now.

With what Julien said, all the so many animals begin shoot and screaming in terror. Maurice and Mort look at each other screaming, Bada and Bing look at each other screaming and gesturing at the same time, and some Chameleons scream too, one of their tongues gets stuck to Mort's face. Suddenly, the bell is heard ringing very loudly. The other animals look up and notice that the bell was being hit by Joey, who hops down from the tower to confront the hysterical animals.

Joey: (confidently) I'll catch your skorca. Catch him, serve him straight up on the barby — for the right price.

The so many animals begin to murmur at each other about Joey's offer. Skipper however doesn't approve and gets the animals' attention by sliding in front of Joey.

Skipper: I don't think so! We'll eliminate this flying sea demon. And we'll even do it even for free! C'mon boys.

The penguins slide away to the clock tower, Julien then confronts Joey on the Penguins' offer.

Julien: (patronizingly) For free? Phff. What good is anything if it is not very expensive? Okay, peoples, your king has heard your babyish squeals for help. And he, me, which is I, the king, am taking the controls of this crisis! Maurice, give the hoppity thing whatever he wants.

The sun is now rising on New York City. The Penguins are seen on the lookout post where Private was on the Clock Tower.

Kowalski takes out his clipboard.

Rico begins regurgitating several weapons of combat, including: a crowbar, a bomb, a plunger, and a chainsaw.

Skipper: Private, I want full details on—What happened to your chin? Were you hit?

Underneath Private's chin, there is a peanut butter winky stuck to it. Skipper reaches for it, despite Private's detest.

Skipper gives the winky to Kowalski, who takes it and eats it to analyze what it is.

Kowalski: Peanut Butter Winky.
Private: (admittedly) OK, I know what you're thinking: "Private ate too much sugar and now he's dreamed up some flying whale that doesn't exist."
Kowalksi: (impressed) Wow. That IS what I'm thinking!
Skipper: Sugar dreams AND mind-reading powers? How many Winkies did you eat?
Kowalski: Skipper?

Kowalski points down and see the entire box of empty Winky wrappers that Private took with him last night.

Private: (desperately) This wasn't just some sugar dream. That orca, it was real!
Skipper: And we want to believe you Private, but compare the evidence.
Kowalski: On the sugary-sugar side, we've got empty snack cake wrappers and your own upset tummy.

Rico then places his head towards Private's belly and pokes at it several times, grunting with approval.

Skipper: On the Skorca side... Nothing. Less than nothing. Kowalski, what's a number less than nothing?
Kowalski: Uh, Negfinity!
Private: But maybe he moved. Maybe he's even coming this way!
Kowalski: Hey! We might already be a winner!

RETURN TO
END OF ARTICLE
Community content is available under CC-BY-SA unless otherwise noted.
Advertisement