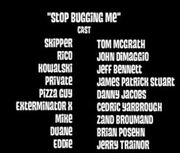 The penguins help the “Broaches” out with their Exterminator X problem.

Private discovers that a group of cockroaches has invaded the Penguin HQ, but shortly learns that they have actually made friends with Rico, who has been partying with them from dawn until dusk, much to Skipper's irritation. Private is terrified of them spreading disease, but Skipper and Kowalski admire them for their survival skills.

It turns out that the Broaches have actually come to ask for help against an exterminator who threatens them and their home. Upon arriving at their home and settling down to wait for the arrival of the exterminator, hours pass but the exterminator is a no-show - until eventually he arrives, and it's - Exterminator X! And he has not forgotten the Penguins at all.

After a fight, Exterminator X captures Skipper, Kowalski and Rico, leaving Private to work alone with the hundreds of Broaches. In order to camouflage his white feathers in the shadows, he enlists the Broaches as a living suit - which disgusts Private to no end. Still, he manages to free the Penguins and creates a distraction for Exterminator X, while the Broaches crawl into his uniform, sending him running.

Once rid of the Broaches, Skipper reminds Private of his squeamish nature, while Private is able to wriggle and squirm in disgust.