The Most Dangerous
Game Night 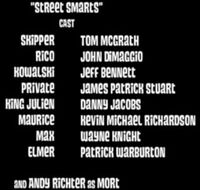 A stray dog refuses to give up Mort after believing he is a squeaky toy, so the penguins set out to rescue him with the help of Max the cat.

When a stray dog in the park mistakes the lemurs for cats and chases after them, Julien throws Mort at him so he and Maurice can escape. Julien then seeks to have Private become the new "cute guy" in his kingdom while the other penguins set out to rescue Mort. The penguins quickly locate Mort and the dog, with Mort in no danger and playing with the dog, Elmer, instead. Elmer explains that he had thought Mort was a cat, but now believes him to be more or less of a toy, which he refers to as "Squeaky." He and Mort wish to play with each other again and establish a playdate for the following day, but Elmer then refuses to give Mort up and runs off with him. When the penguins happen upon Max, he helps them with dog-locating techniques and later distracts Elmer while the penguins rescue Mort from a dumpster and again so they can manage an escape. The penguins then presume Moon Cat to be dead, but later discover that he and Elmer became friends, Elmer believing Max to be a lemur.

Community content is available under CC-BY-SA unless otherwise noted.