Tears From Your Eyes

Tears From Your Eyes 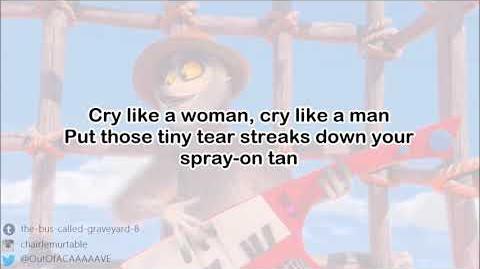 You got to know know

Life is a story about feeling

I can show pics of bunnies and beavers

Got a cute chipmunk saying, "Hey what's up"

Check it out, Mo Mo. You remember this?

oh, we were crazy back then, weren't we

Oh look at this one

Put those tiny tears streaks, down your spray tan

Cry like you're feeling it deep in your bod

Those tears from your eyes

King Julien beginds sating about a mystery solving group, which includes his Royal Entourage, his key-tar and himself. He said that the group broke when Mort and key-tar fell of the cliff. Later, Julien gets a contract from Tammy as she asks to search Butterfish. Things unravell in a very eccentric manner, which causes Julien to take help from Maurica and Clover. It was found that Karl planned to replace all his peoples with robots and King Julien, Maurice, Clover and his people were to die since they were to be put to a volcano. At this moment, Mort comes with Key-tar. Julien uses the Key-tar to sing this song, so it will make Maurice emotional. As a result, the robots would blow up. Apparently, the episode was dream that Julien saw, and he was saying this to Maurice, Clover and Mort.