Madagascar Wiki
Register
Don't have an account?
Sign In
Advertisement
in: Residents of Madagascar, Characters, All Hail King Julien,
and 8 more
English

For other characters or uses of Ted, see Ted (disambiguation)

Captain of the Ringtail Guard

Ted can simply be described as imaginative, cutesy, dramatic, and sometimes awkward and ditzy. He tends to get nervous very easily, sometimes to the point of having accidents, first shown in the episode "Eat Prey Shove." He is generally a happy, sweet, and flamboyant guy. Ted will also use silly words such as "fumble-rooskies", "suresies," and "flipperdoodles".

Later in the series, he is shown to have a catty and temperamental side, for example, when he threw a fruit at a lemur who angered him in the episode "Diapers Are the New Black", and also when he got into an unfriendly competition with King Julien's diaper fashion line in the same episode. It is unknown whether he got more temperamental for a particular reason, or if this side of him was just revealed. Ted will occasionally participate in an illegal not-so-harmful underground business, sometimes to King Julien's chagrin.

In All Hail King Julien: Exiled, Ted is a supporting character rather than a recurring character and he reveals his full name to be "Theodore Pantskin". Receiving help from his alter ego, Snake, Ted grows to be stronger and better at combat, and saves the lives of King Julien, Maurice, and Pancho. He even manages to impress Clover when he later saves her from some mountain lemurs.

In the episode "Gimmie Gimmie Gimmie: The Game", Ted is revealed to enjoy saying, "Oh no you didn't!" He also says "Oh golly" when scared or frightened. He will also use terms of endearment, namely to Clover, calling her "honey" sometimes. He speaks with a slight valley girl accent and is the only recurring character shown to do so. He is possibly the next best dancer to King Julien. Ted and Julien were seen dancing together twice in the episode "My Fair Foosa", with the first time being interpretive dance, and the second time being a coordinated hip-hop routine. Despite being a skilled dancer, Ted once hurt himself while showing off his moves to King Julien and Rob McTodd. He is also shown to have a flair for the theatrical arts, such as when he and Mort act out a rom-com for King Julien, and when he and Julien were doing an interpretive dance routine. He was officially revealed to like acting when he mentioned the need for more community theater in "My Fair Foosa". In "Election", he mentioned that he takes pottery lessons and is part of an improv club. Ted, during an audition to be an entertainer for King Julien's club, is shown to be good at making music with his tail. He does this by brushing his tail on the rims of coconut cups. Ted appears to like children, and be good with them, as he and Dorothy happily hosted a parenting class for expectant mothers. He also enthusiastically hosted the Junior Gents Pageant. Both of these incidents were in the episode "Daddy Julien". He is a decent singer, shown as he was singing the theme song for the aforementioned pageant. Ted is shown to be a hugger, namely to Clover, Maurice, and Dorothy. 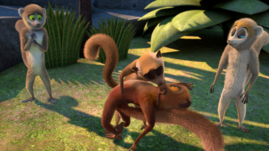 Dorothy: After some episodes showing her and Ted spending time together, Dorothy was revealed to be his wife in "Crimson and Clover". Dorothy, in that episode, revealed that he cried during their honeymoon, though she didn't seem at all bothered by the fact, thinking Ted was crying out of happiness. Dorothy, therefore, seems to be the slightly less intelligent one of the two. She has some similar traits to Ted, also having a cute personality and a high voice. She seems to be happier and more contented in her marriage than Ted does. Ted was even once shown checking out Crimson as she pranced down the aisle. He even once said, "Aren't we all?" when looking for love was mentioned. Ted, however, doesn't seem to be completely discontented, as he still happily spends time with her, and sometimes wraps his arms around her. During the visit of King Julien's parents, Dorothy was seen caring for Ted by giving him food while all of the other lemurs were trying to sacrifice him. Ted whispered "I love you!" as she ran off after she lied to the other lemurs to protect him. She appeared disappointed when Ted was eventually caught. Dorothy and Ted are passionate artists and art fans, and they even once started a secret art program when King Julien temporarily banned art.

Clover: Ted is her assistant captain of the Ringtail Guard, though he isn't nearly as tough and fearless as her. Although he will somewhat show bravery, he has very poor fighting skills. His job isn't very high maintenance, as Clover mentioned to Koto that although there is an Assistant Captain of the Ringtail Guard, it's mostly just her. He is sometimes seen working with Clover, whether it involves the law or helping King Julien. In "Eat Prey Shove", he once took Clover's place as King Julien's bodyguard, but he proved to act more like King Julien's friend. He failed to protect King Julien from dangerous situations, and could not fight off the foosa. He also cluelessly told them that Clover was gone. Clover once busted Ted and Dorothy for illegally providing copies of King Julien's diapers in "Diapers Are the New Black". In "Run for the Border", Ted became captain of the Ringtail Guard when Abner and Becca temporarily took over the kingdom. He was also ordered to guard Clover as she was locked up. He showed kindness towards her, but he didn't want to free her because Abner and Becca convinced him and everyone else that Clover was a "vicious enemy of the state" and a "traitor". Ted eventually did free her when she held Dorothy hostage by grabbing hold of her neck.

King Julien: Ted, as mentioned before, was temporarily King Julien's bodyguard in "Eat Prey Shove". He very much liked his job, because he was thrilled to be close to a "real live king," and because he also got along well with him. They are shown to be good friends to a degree, as they are seen throughout the series spending time together. He once almost accidentally killed King Julien when in a dangerous game, as he fired a harpoon towards a fruit on King Julien's head, almost hitting King Julien, but thankfully hitting the fruit instead. Ted later faints when King Julien wants to try shooting a fruit on his head in return. Ted and Julien are both good dancers and have done dance routines together twice in the series. Ted once had a caricature artist do a drawing of both of them together, but Ted was the only one of the two that liked the drawing. King Julien, while not disliking Ted personally, said to Maurice that Ted, unlike Clover, was too soft, like "French cheese or something". Later on in the series, King Julien at numerous times enlists Ted's help for different things.

Snake: Snake is the alter-ego of Ted. He appears to help Ted fight and brought out Ted's dominant side. He met Ted on Siren Island, when he helped Ted defeat the Tentacle. In the episode "Spin Cycle", Ted and Dorothy attempted to bring Snake back via Dr. S (who surprisingly succeeded). But soon enough, having Snake around instead of Ted proved to be a problem, and so Dorothy spent the second half of the episode trying to get rid of him as she missed Ted. Eventually when Snake ran over to 'fix' the overheating/malfunctioning invention Timo had invented, he was zapped and returned back to Ted. At the end of the episode it shows Ted brushing his teeth late at night, where Snake appears in his reflection and saying he'll "always be there", spooking Ted out.