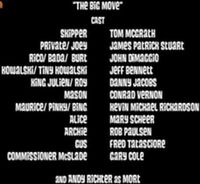 The lemurs are told to keep a secret entrance to the park secret to others, but Julien soon tells every other animal about it and when Burt jacknifes in the tunnel and there's a photo op, the penguins must act fast.

After the lemurs enjoy a night out in the park that had also given the penguins a better night's sleep, Skipper decides to help the lemurs continue to slip into the park via a secret tunnel, though the other penguins express concern. Julien is instructed to keep quiet about the arrangement, but soon spreads the word anyway, resulting in many of the zoo's animals venturing into the park at night. Skipper believes everything will be okay when the penguins discover this, only for Burt to complicate matters when he jackknifes himself inside the tunnel once morning comes, creating a traffic jam of sorts for the animals. Kowalski tries to shrink Burt in order to get him free, but he accidentally shrinks himself and spends the remainder of the time trying to get back to normal which makes Skipper impatient, the other penguins attempt to delay Alice and the visiting Commissioner McSlade from discovering the absences. Ultimately, Julien unintentionally frees Burt when he opens a water main, believing it is a "smoothie pipeline," which blasts the animals back into their respective habitats.