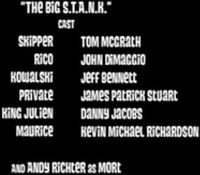 I Know Why the
Cage Bird Goes Insane

Julien discover that the penguins constructed a gigantic toilet and gets infatuated with it, scheming to make it as his new throne but the toilet was really a trap in reality.

After it gives him a splinter in his rear, Julien wishes to replace his throne with a new one. Meanwhile, at the penguins' HQ, the penguins are counting the amount of grains of salt and pepper. Rico accidentally inhales some pepper and sneezes, causing him to ricochet around until he hit a hidden switch. Beneath him rises a long-hidden machine, the Big (P.:)S.T.A.N.K.((Project: )Super Toxic Aromatically Noxious Kaboom-boom), into view. S.T.A.N.K., as a stink bomb-armed toilet, once intended to trap Dr. Blowhole, was abandoned after the penguins discovered that dolphins do not use toilets as they, along with all other sea life, use the ocean as their toilet; Private is severely horrified this thought. Skipper concludes the discussion and S.T.A.N.K.'s backstory by stating that the project was a total failure and a waste of time and resources.

Unfortunately, as they discover to their horror, S.T.A.N.K. was still active and anything can set it off. Now forced to permanently get rid of it, the penguins decide to transport it to a highway rest stop far away from the Central Park Zoo. But Julien, desiring it for his new throne, pursues with Maurice and Mort and subsequently gets himself strapped to S.T.A.N.K. upon sitting on it. With S.T.A.N.K.'s core approaching meltdown, Kowalski and Maurice return to the zoo to try to figure out how to safely free Julien without the bomb detonating.

As the others press on, Julien cries non-stop over the thought of being chain to a doomsday stink bomb. Things take a turn for the worse as Mort impulsively takes the wheel from Rico, riving them into a subway tunnel, right in the path of a subway. Rico regurgitates a rocket to strap S.T.A.N.K., launching Skipper and Julien straight into a New Jersey junkyard.

Back at HQ, Kowalski and Maurice try find the right liquid solution to short out the locking circuits on S.T.A.N.K. using identical toilet seats, only to be constricted by them too. It is ultimately determined that sodium chloride (salt) will short out the lock on the restraints, and that tears would be an effective solution. After Julien is unable to cry on command, Skipper thinks of all the time he had wasted with Julien and sheds a single tear, unlocking the restraints. Unfortunately, S.T.A.N.K. is about to explode. Luckily, Private swoops and saves them and they clear the stench radius in time. Kowalski comments that the air quality over New Jersey has actually improved. Meanwhile, Julien teases Skipper over his "girly" tear.