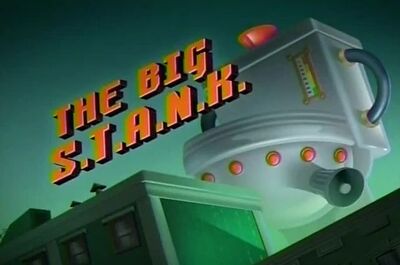 King Julien: AAH! Maurice! Mort! Come quickly!(Maurice and Mort arrive) This kiki-tiki throne has viciously attacked my magnificent booty with this stabbiness. (Has splinter on butt)

Maurice: It's just a splinter.

Rico sneezes, blowing the pepper away.

Rico sneezes again, this time knocked backwards, hitting the walls until hits a brick in the wall that opens up a trapdoor. Rico immediately runs away from the trapdoor as a toilet comes out of it.

Skipper: Kowalski, that can't be what I think it is... Can it?

Skipper: After all these years, I tried so hard to forget.

Kowalski: Project: Super Toxic Aromatically Noctious Kaboom-boom. It was... it was a horrible---!

Private: Acronym is not very good either.

Kowalski: But not just any stink bomb, the grand momma to end all stink bombs, it was designed to lock on to a target & hold it their until the order cord detonated.

Skipper: Private, putrid perfume of Project: S.T.A.N.K. is a bazillion times worse than anything you've ever smelled.

Skipper: Is too, International Numbers Council just declared it.

Kowalski: And that's not a real council.

Private: So who was S.T.A.N.K. supposed to lure into it's foul seat?

Kowalski: And that's where the whole project went wrong. Turns out dolphins don't use toilets.

Skipper: Not when they've got the Seven Seas to soil.

Skipper: Oh yeah, all the sea creatures do it, fish, whales, lobsters, octopuses...

Skipper: Any-who S.T.A.N.K. was a bust. Total waste of a perfectly good toilet.

Skipper kicks the S.T.A.N.K., causing it to activate.

Kowalski: Apparently, but we should be safe as long as we don't disturb it's fragile core.

(Rico sighs with relief, and the S.T.A.N.K.'s level rises)

Private: But where do we take it, Skipper?

Kowalski pulls down a map.

Kowalski: Gently Rico, the tiniest movement could initiate the detonation timer, we have to be very, very, very careful.

King Julien: No! My new royal throne must be something that really "Wows" my breath away. I'm looking for something big, something shiny-

The Penguin Car goes by, followed by the penguins' truck with the S.T.A.N.K. while Julien stares at it mouth wide-open.

King Julien: And something with cool blinking lights along the side like that!

As the car and truck exit the Central Park Zoo, the lemurs run after them.

King Julien: My throne! Where are you taking my new royal throne?!