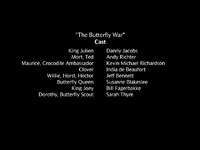 King Julien declares a war against butterflies to raise his kingdom's spirit, but when the village is destroyed he decides to hold a peace summit.

One morning, Julien gives Hector an award for his service in a war a long while back. The kingdom looks on in boredom. Julien disapproves of their complaining, instead demanding they show “lemur spirit”. However, nobody does, and they leave when he turns his back. Hector leaves too, mumbling that they would be acting differently if they ever had to go to war. An idea strikes Julien.

Later on, Julien and Mort review other kingdoms in Madagascar with whom they could go to war. Maurice walks in as they decide on the butterflies, and reminds them that the kingdom will never support a war with a group of innocent insects, but Julien insists the butterflies will strike first.

On a ledge near the water slide, Mort is dressed as a butterfly, fruits in his arms. Julien tells Maurice that they will frame the butterflies for an attack on the water slide to unite the lemurs in support of a war. Maurice is dragged to the top of a tree, holding the rope from which Mort is dangled. With encouragement from Julien, Mort begins hurling the fruits in his arms at people sliding down the water slide. Finally, Maurice can no longer hold the rope and drops Mort, who crashes into the beams which support the slide. It collapses. Clover rushes to the scene, but is pushed aside by Julien who rushes to see Ted. With mock sympathy he asks what happened. Ted claims that a large butterfly attacked them. Julien declares that the lemurs should bond over this and start a war. The crowd, even Clover, supports this war. 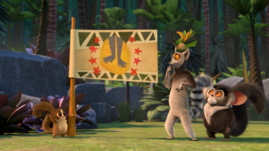 Julien is quite happy that his people are united, but Maurice warns that his plans have a habit of backfiring. Maurice’s long list of examples are quickly interrupted by Julien as he heads towards Mort. Mort reveals his design of the flag of the Lemur Kingdom, which is later depicted in future episodes.

Later, Clover enlists new recruits as Julien revels in his victorious idea. However, when Clover asks to train her new recruits, he laughs until Maurice tells him that it’s all fun and games until the butterflies discover they have declared war on them. Clover overhears this and questions Julien, who tries to weasel out of responsibility and blame Maurice yet again. He tells Clover the butterflies will never know.

However, a spy is in the midst: a young scout butterfly who tells the queen that they are now at war with the lemurs. She is thrilled; they will no longer be seen as fragile and incapable. 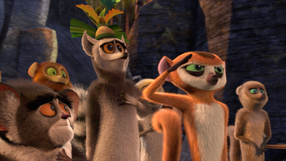 The following day, the kingdom stirs with morning activities. In the treehouse, Julien is sleeping peacefully as Mort watches him smiling. Maurice is in the plane, reading a book in peace and quiet, Hector is in his house, trying to put his medal, Ted is in the shower and Clover doing pull-ups. Suddenly, the lemurs hear the whir of butterflies zooming overhead, dropping kumquats on people and houses. After the damage is done, Clover discovers the S.S. Pee Pee Pants is gone. The kingdom gathers at the cove, mourning the loss of the ship. Ted sings a song.

Later in the plane, Julien decides the kingdom needs a “war buddy”. He chooses the rats after upsetting the Crocodile Ambassador with a gluten filled cake. Back in the plane, which Clover has renamed “the situation room”, she begins her briefing. Joey fails to understand her briefing. Overexcited, Clover cannot decide what to do, so Julien sends for Hector. Hector leaves immediately. Suddenly, they hear the butterflies attacking again, this time with crocodiles and bombs. Clover leads a crowd to a cave for shelter.

When they re-emerge, they discover the kingdom ravaged. However, Julien finds a flower, and says that if the flower can live in peace, they should too. He sings a song, and decides to invite the butterflies and crocodiles to a peace summit.

At the peace summit, Julien offers the butterfly queen a flower and a peace treaty to sign. The crocodiles are absent. She declines, and declares all out jungle war. However, she is quickly eaten by the carnivorous flower below her. The butterflies cheer at the loss of their oppressive ruler. Peace is achieved, and Julien is happy with this outcome. Meanwhile, the Crocodile Ambassador screams in a maze Joey has trapped him in.