The Day After Yesterday

Julien 2.0
Nearly vanquished by Koto's troops, King Julien rallies his loyal friends and troops for one last attempt to regain his throne. The Day Before Tomorrow is the finale of All Hail King Julien: Exiled.

The sword continues heading for King Julien. Clover, Maurice and Mort all try to stop the sword but all of their attempts fail. Luckily, the sword pierces Benson's butt cheek, much to Koto's dismay and King Julien's relief. Clover arrives to try to convince King Julien to escape the battle alive before they start celebrating. King Julien refuses to leave, stating that they "obviously have the upper hand".

However, Pineapple reveals that as it turns out, they do not have the upper hand, that the worst is yet to begin and starts to narrate the incidents occurred. On the morning of the Battle of Booty Ridge, the Kingdom of Madagascar, along with assistance from the foosa, snails, Mort Horde, Butterfly Kingdom, Aye-Aye Kingdom and the Rat Kingdom, launches "an epic blitzkrieg attack" on the mountain lemurs. Most of the kingdom runs away like "toddlers" after "remembering that the mountain lemurs are big, strong, and heavily armed." Pineapple states that King Julien was "very active driving the story of the battle and briefly turning the tide;" however, Pineapple notes that King Julien's happiness did not last. Finally, Pineapple concludes that King Julien and his peeps were loosing the Battle of Booty Ridge and needs a miracle to win. A little humor is added when Ted tries to find his arm which was just behind him. Clover was exhausted after a grueling battle but still hits a mountain lemur who comes to attack her. Suddenly, a rat accidently hits her and she is pulled to the ground. She looks at how the members of King Julien exclaims and is fear. Luckily, she catches the sight of King Julien and Maurice who were surrounded by 4 mountain lemurs. Clover rescues King Julien and Maurice and requests King Julien leave the battlefield. At first he first disagrees since he had been there, done that and thinks that others will think him as a total wuss. But he is compelled to agree when half a dozen spears strike a palm tree in an attempt to kill him. He shrieks, "Run, fall back. Retreat".

The combined forces retreat. The Mountain Lemur Captain asks Koto to stop the retreating forces, but Koto states that the morning will track them down and "exterminate them."

The kingdoms are seen at the camp, trying to heal their injuries after the war. King Julien and his crew camp beside a waterfall. King Julien blames himself and decides to turn himself in, so Koto will let others go free. King Julien shows his true leadership qualities where he dislikes others of his team to be hurt due to consequences of his faults and his sacrificial love towards his people. However, Sage says Koto would take revenge on all of them anyway, because they ruined his wedding. Some humor is added when Mort says that Koto looks up to him. Maurice unenthusiastically says that no one looks up to him and states that they must move away from here. King Julien continues to blame himself and adds that he was never a "real king" and got the job because his uncle wanted him to get eaten. Finally, he notes that his "peeps deserve better than a loser like" him. Clover agrees with Sage and even states that it is typically not the case. She that they must fight Koto, but King Julien thinks that there is no hope since they had out numbered them like to "infinity-to-one". Maurice realizes that they don't and they seem to outnumber King Julien's troops since they work as one unit and are one kingdom while they have multiple kingdoms. Clover agrees with Maurice and says that they only a leader to unite them.

Clover takes a knee and bows to King Julien and notes, "You love your kingdom more than anyone. If I must die, I'd prefer to do it fighting for my king." King Julien was stunned and states, "Really?" Clover continues and adds, "The only thing I have left to give, is my life. It is yours. She was accompanied by Maurice who states "Mine too, Your Majesty" while Mort notes, "Without The Feet my life would be twice as meaningless as it is now."

King Julien is surprised and sees how the rest of the army, including the foosa, Mort Horde, Space Monkeys (Including Stanislav and Ceaser), Karl and Chauncey, pledge allegiance and bow to respect him. king Julien asks Maurice what is happening and Maurice takes his hand and states that he just became "The One True King of Madagascar." Motivated by this, Julien unites the army with his speech.

Julien says:"My peoples! We face an enemy that I admit seems invincible. The Mountain lemurs are strong and they are disciplined. And us? we are not. At all. Our kingdoms have nothing in common. Like zero! We are all different. And, sikapow! Plot-twist. That's what makes us strong, y'all. If we work together and lean on each other's differences, nobody can beat us! 'Cause the Mountain Lemurs only have one strength. And what is it? Well, it's their actual physical strength. But us? We are all over the map, baby. And most importantly, we are not alone! Ted you still have Tentacle's contact info, right" Ted says no but can track it down. He continues, "Hot dog! That's the kind of can-do attitude I love! My peeps. We are united under the same freaky flag! One island under Frank! With liberty and hummus for all. Tomorrow, we take back our island" All cheer hopefully motivationally as we cut to up there, butterflies flying.

The following morning, Koto asks the army to bring Julien and who brings will be rewarded. However, King Julien shows himself and he is quite upset since he was hoping to hunt him. King Julien offers Koto a chance to surrender to him so he would let them go to their kingdom. Koto refuses and laughs. Julien was surrounded and he asks Horst to drop a music and results in an all-out war where the different kingdoms. Todd attacked the Mountain lemur captain and the rats use their famous maze too. The butterflies carry aye aye grenades and causes damage to the enemy. Clover and King Julien ride the foosa calvary, when King Julien uses his keytar to hit the enemy. Unfortunately, Clover gets knocked over. Snake comes to save him but Ted says that he is not a “Picky Pedro”. King Julien was happy as they were winning until he was knocked away from Mary Ann's back by Koto. Koto says that it was a noble effort and he underestimated him, and before he completed his sentence, the floor cracked. He tried to hit King Julien but Tentacle catches Koto, throws him and apologizes King Julien for been late. Koto asks the artillery to fire which causes some had times to Tentacle since he is an indoor Tentacle. His father arrives from the sky with a baseball bat and begins to hit the rocks. The two family members have a touching moment and begin to fight of the enemy. At the end, combine their forces to defeat the Mountain Lemur Kingdom. It appears that their combined forces have ultimately defeated the mountain lemurs and successfully won the war. Eventually, the mountain lemurs retreat.

King Julien states that he will go with the big question and says that he will have a victory party. Out of the blue, Koto attacks him and his hawk grabs Julien and prepares to kill him before he can even finish his speech. Sage flies up with his hawk to help, and gets Koto to release King Julien at the air as a result of their talk. Sage tries to catch him but Koto stops him. Clover ultimately saves him. The two brothers fight (while Pancho and Mort comment), and Sage manages to steal his replacement tooth back. Both jump off their hawks and Koto's sword is thrown away of his hand. The two brothers accelerate downwards and hits the earth with a great force.

The two brothers land at the foot of Koto's statue. Sage prepares to kill him after asking whether he has any last words. Koto says he can't kill him because he can't even hurt a plant. But Sage says that the journey that brought them here shows that there is no option. Koto says to wait. Clover stops him, finally understanding the purpose of their quest. She tells him Koto deserves punishment for what he did, and killing him would be too easy. She says that he must live with the consequences of his wrong actions since it is the best punishment a warrior deserves. She tells him she realized there are other solutions than violence, and that with his nonviolent ways, he is perfect to her. They hug. King Julien also agrees to let Koto stay alive so that he can "stew in all of his life's mistakes in exile, or some sort of jail situation, or just like a really aggressive time-out". Sage agrees to this and spares his brother's life.

However, when King Julien starts mocking of how Koto unsuccessful was of taking over kingdom, he accidentally and unintentionally murders him by crushing him to death when he was leaning on his stone statue. Sage and Clover escape as the statue crushes Koto, leaving the former mountain lemur king dead, killed and lifeless. King Julien places this blame on Maurice by saying "Maurice what did you do?", much to the latter's charging. He gets his crown back, much to his relief. Mort begins to kiss King Julien's feet, but is quickly kicked away by agitated King Julien.

After Koto's death and the end of the war between lemurs and mountain lemurs, big victory party starts, and lasts for three weeks, somehow causing more damage and larger casualties than the war itself. All the deceased characters (King Julien the Terrible, Captain Ethan, Karen, Vigman Wildebeest, Magic Steve) arrive at wave at King Julien and Maurice. Koto’s spirit arrives too, and King Julien and Koto smile at each other and nod, implying that both of them have finally made peace with each other and both of them are friends(Koto has understood his faults). In the end, the kingdoms all go their separate ways. King Julien goes to sit on his throne, but finds out that there is something wrong with the throne: Koto has already made a "weird" and "wet" "butt groove", so he calls for Maurice to fix it. Maurices asks to kill him.

The episode ends when Hans and his zombie army arrives, and Mort states that they missed the big war, but there is always next year, much to Hans' dismay. 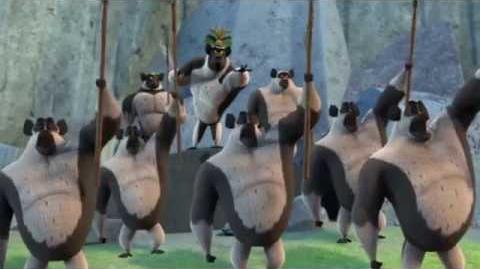