The End is Here

The End is Here

The End is Near

When King Julien and the gang bury Sage for his bachelor party, things don't go according to plan and they must deal with Franken-Sage! This is the final episode of All Hail King Julien. 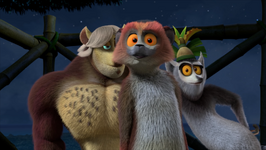 The episode begins with the bachelor party done by the boys for Sage as he is to be married to Clover. They have fun with activities like shooting Koto's image and making Mort eat many kumquats. After sometime, King Julien finds that Sage is missing. He asks why he is sad, and inquires whether it is Pancho who appears from no where. Out of the blue, Pancho appears to say that he is no tlike what King Julien said. Ultimately, realising that he is so, he disappears. This adds humor.

Sage says that he need to give rebirth and King Julien asks whether he can give birth Mort. Then he says that the ritual is specific and says that the he must be buried before his marriage as it is a mountain lemur tradition. After burying, Mort asks should he have one of his stone, which he prepared to have near his grave, to mark where they buried him. Then Julien keeps a leaf to mark the place. Maurice reasons out it is not a good idea as leaves can be blown away, but Mort, as usual, defends King Julien's point.

Meanwhile, the girls had a party for Clover who had been given many weapons as gifts. Suddenly, she then runs mad and hides herself in the toilet. As Masikura said to, XiXi goes to comfort her and when Clover says that she is so happy and loves Sage. But is angry that she is girly. Xixi points out that loving someone makes someone real. As a result, she is comforted and decides to get out of the toilet, where she meets Crimson and Clover shrieks.

Next morning, Julien comes to give Sage scorns that Ted made. Then Mort asks where did they buried him. Maurice blames KJ and they begin search him. As they where unsuccessful, he says Pancho and Butterfish to keep searching, Ted to stall Clover and Mort and Maurice to come with him. They asks DR.S, Nurse Phantom and Timo to built a new Sage and they give Franken Sage a test, but fails as Sage's hawk destroys it. Back at Clover's hut, Clover and Crimson argues and finds Ted with Clover's wedding dress. Clover chase Ted and asks Crimson to leave with Ted. Crimson says that she likes but cannot. When Clover asks why, Grandma Rose appears and says and she will not let her leave. There is conversation between Clover, Crimson and Grandma Rose. Crimson says that she wanted to beat her by marrying Sage. Crimson decides to but Clover requests her to walk her down the aisle.

KJ is worried and asks Timo the progress. Though Timo says that Dr. S is doing the final touches as they speak, Franken Sage is shaking Dr. S and was squeezing his neck. Here, Dr. S asks Nurse Phantom to use the saw. Some comic is added. When Pancho and Butterfish comes, he asks for the news but they had only a no. King Julien asks whether they dug enough holes. Pancho says he did but he had to work with Butterfish, whoose "work ethic was a disgrace." King Julien goes to Clover's hut to say Ted to stall Clover, where he finds Clover and is amazed by her beauty. When he hears Crimson's voice, he tries to defend Clover. Realizing that Clover is still the Captain of The Ringtail Gaurds for some hours, he asks to take her down or play a dead match. King Julien is amazed to hear that they had united. Crimson tries to get back Julien's love but fails. However, she says that she will eventually get Julien. To add humour, Ted says that he was hired to officiate a wedding. Masikura says that it is her thing, Ted gets furious and darns the banana. Timo is worried that place is rented until 3. Julien says that Clover will only walk down the aisle if she hears music, and he had told the rats not to play until he told. To his dismay, rats begin to play and he sees Clover walking down the aisle, he stammers and stalls as Maurice said. Here, King Julien voices out and speaks to the audience and to Clover. He says how his life as king flowed and ultimately begins to talk about Clover and how she claimed a piece of his heart. He says how he's going to miss her, how he became the lemur he is now and tells her that he loves her, he thanks her for letting he having the honor of been his king, which leads Clover tears of joy as she tearfully hugs Julien, an emotional scene is made until Franken Sage comes. When he arrives, Franken Sage explodes where KJ says the truth. Doctor S appears and explains that he installed all of Sage's insides with dynamites. Maurice is furious and asks:"Why would you do that?!" Clover cries and then hears Sage's mourn. They find him and he says what happen. Clover quiets him and says she is happy that he is safe. 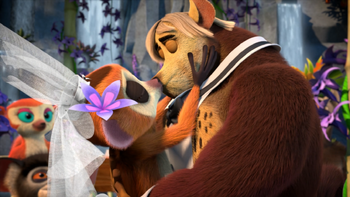 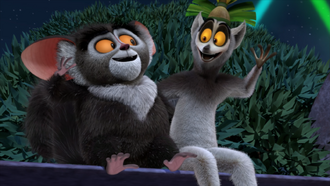 Then she kisses him on the lip, then they are married and pronounced as king and queen of mountain lemurs. DJ Glitterbunz stops the kissing and moves to have a party. All dance where all enjoy, especially Julien and Maurice who show some nice moves. To add humor, Ted have a funny conversation with Andy, Becca and Abner. Clover and Sage leaves the kingdom. On the edge of the plane's back end, Mort wishes that he marriage will last long than his 12 marriages as his wives died of old age. Then KJ pushes him down. Then Maurice remarks, "Gonna be strange not having the whole gang together anymore," where King Julien answers, "Yeah". King Julien adds to it, "But you know what I love about our lives, Mo Mo? Something big, and I'm talking huge, could be just right around the corner." After this, Pineapple appears in Frank-ri-la with all the dead ones, that King Julien was right and shows how King Julien and Maurice hugs each other after a friendly punch. From the edge of the plane where KJ and Mo Mo was, the view goes to the coast line and shows Alex been washed away to the shore, which leads to the incidents found in Madagascar. Shocked, Alex asks:"Where are we?", which foreshadows that his friends with him, ending the episode and the series. This is the end of the Television series. "All Hail King Julien."