Madagascar Wiki
Register
Don't have an account?
Sign In
Advertisement
in: Episodes, Episode focusing on Marlene, Episodes focusing on Skipper, The Penguins of Madagascar Episodes
English

The Most Dangerous Game Night

The Most Dangerous Game Night 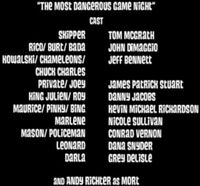 Marlene proposes a game night among the zoo animals, but things get out of hand when a search for party mix lands some animals in big trouble.

Marlene plans a zoowide game night, hoping that it will bring the so many animals closer together. Skipper, however, questions if Marlene can handle a game night and warns that her idea could turn on her. As the other animals partake in game night, Skipper observes to ensure that everything remains orderly, and stays behind when Maurice, Mort, and Kowalski leave the zoo to procure more party mix from a local snack store after Julien eats all of it. While they are gone, Skipper's earlier fears begin to come true as the animals begin to not get along with each other due to the games. Meanwhile, a silent alarm is set off at the snack store, summoning the police and trapping Maurice, Mort, and Kowalski inside. When the zoo animals learn of the three being trapped on TV, Skipper seeks Marlene's help to rescue them by organizing the animals to improvise various games on the street to take down and distract the police. The plan succeeds, as does Marlene's original goal of bringing the zoo together.