The All Hail King Julien Show 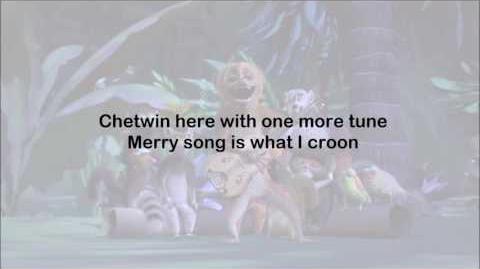 After Clover is knocked unconscious, the entire kingdom plays along when she wakes up believing she’s living in a make-believe storybook world.

Clover is writing the end to her novel and gets interrupted by the noise of King Julien's safety boat evacuation drill. When the boat crashes towards a group of old lemurs, Clover stands in the way, saving the elders, but ends up taking a blow to her head hit. She is knocked unconscious, murmuring about characters from her story. She is taken in by Dr. S who says to the others they must act as characters in her story until she is recovered enough to remember who she is. Characters are given and King Julien is disappointed because he must be a squire (while Maurice is a knight). The quest to save Norge (another character in the novel, played by Sage) progresses and King Julien quickly gets bored of it. Ultimately, he leaves the group. King Julien then meets Rob who makes him understand that each person is the star of their own story, so Julien cannot be the lead star of everyone's story; he must respect that he is not the center of attention all the time. He understands that it is not bad to be a sidekick.

Meanwhile, Clover, Maurice and Ted leave to fight the double headed dragon (played by Masikura and Maggie). They continue forth to save Norge. Suddenly, they are caught in a trap set by Mort, who is playing the antagonist. Ted says that Mort's acting is very convincing but gets scared when Mort begins to drop them into a volcano. At this moment, King Julien comes with Clover's sword. King Julien and Clover begin to apologise each other until Maurice reminds them they are about to fall into a volcano. King Julien throws the sword to Clover, who cuts through the net. Mort tries to flee but Clover stops him. Mort decides to fight her with a banana, but the banana gets thrown into the volcano. Mort sheepishly begs Maurice for help, so Maurice asks King Julien whether they are really going to let Clover kill Mort. King Julien says they can't "play Frank", but Maurice convinces him to call to Clover. Meanwhile, Mort decides he will fall into the volcano, if it means his act will save Clover's brain. Luckily, Clover comes to before she kills Mort, remembering herself. That night, Clover finishes her story and reads it aloud to the others.