Madagascar Wiki
Register
Don't have an account?
Sign In
Advertisement
in: Episodes, Episode focusing on Marlene, The Penguins of Madagascar Episodes
English 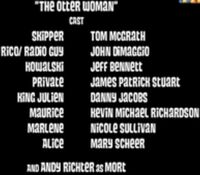 The Most Dangerous
Game Night

Distracted, Alice places too many chlorine tablets into Marlene's pond, which bleaches Marlene's fur white following a brief swim. When she goes for assistance, Kowalski incorrectly believes that she is a rare Arctic mink; while grasping her tongue, he also misinterprets her name as "Arlene."

Skipper and Julien quickly become infatuated with this "new" zoo resident, failing to listen to her insistence about who she really is and how her appearance changed. King Julien wants to make her his queen. Later, after Skipper finds Arlene in Marlene's habitat with the latter unaccounted for, he suddenly suspects Arlene to have done something horrible with Marlene. "Arlene" is then confronted by the penguins and chased around the zoo until she is found by Alice and her natural fur color restored with hair dye.

Afterward, as Marlene wonders to the penguins about why they didn't recognize her, Mort is seen with bleached fur, the second victim of over-chlorination (or perhaps an attempt to get to Julien's feet). Marlene and the penguins see this, but the penguins simply put their sunglasses back on and go back to sunbathing while Marlene smirks.