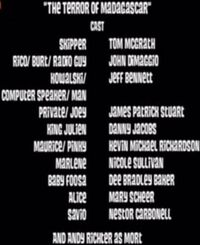 When a baby fossa is transferred into Central Park Zoo, King Julien finds himself on the receiving end of its constant biting.

When a new animal from Madagascar is transferred to Central Park Zoo, King Julien decides to throw a welcoming party. However, the party is cut drastically short when he pops open the crate and discovers a fossa inside. Everyone panics and the penguins leap into action to deal with the threat, only to realize that this fossa is a baby with only one tooth. While everyone fusses over the baby Fossa, King Julien insists that it is still a fossa and has an evil plan to eat him.

Over the next few days, the baby Fossa starts to stalk King Julien and frequently bites him. Despite King Julien's desperate attempts to show the others that the baby Fossa is evil (going so far as to offer up Mort as bait for the baby Fossa; it backfires when Mort and the baby start playing together instead), no one believes him. When he overhears Alice declare that the baby fossa will be ready to eat solid food soon, King Julien gets into the office and uses the computer to work out a transfer.

Eventually, the baby fossa is still transferred out of Central Park Zoo, to resume his zoo-to-zoo tour before returning home to Madagascar. King Julien, now greatly attached to the baby, accepts a final "love bite" from the fossa and happily discovers the baby has grown his second tooth.