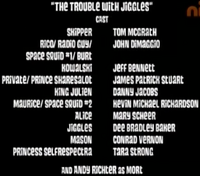 When the other penguins discover that Jiggles is still alive, they start trying to destroy it, which causes no end of problems.

Mason rummages through his stuff to search for his Victorian era wig. He questions Phil who has no idea and just shrugs, realizing it is missing. In the office, Alice sits down on her chair, receiving a call that a mallet is missing and checks over her desk which is also missing.

Back at Penguin HQ, the name plate on Alice's desk is smashed by a mallet as Kowalski's court martial begins, with Skipper as judge (in Mason's wig), Kowalski as the defendant, Private as the prosecuting attorney, Rico as defence attorney and King Julien as court stenographer. Skipper appeals to Private as he starts about Kowalski, and the scene flashes back to earlier that day.

In the flashback, Private and Rico are playing a card game while the Lunacorns plays on TV. Skipper can't stand it and while hunting for the remote, enters Kowalski's lab, where Kowalski is playing with Jiggles. Skipper freaks out and starts screaming, while Kowalski tries to cover it up.

Returning to the court martial, Private calls out Kowalski for lying about destroying Jiggles, while Kowalski meekly protests he never technically said he did. Still, Rico switches from defence attorney to executioner, but then Kowalski objects, accusing Skipper of causing the real crisis, with Skipper cringing.

In the flashback, Kowalski insists that Jiggles is no longer a danger, since he doesn't eat fruit, or grow in size - now he only eats whipped cream. Skipper doesn't buy it and grabs a baseball bat from Rico, trying to smash Jiggles - to Kowalski's horror, since he still thinks of Jiggles as his baby. To everybody's surprise though, hitting Jiggles just makes it multiply - which isn't helped by Skipper trying repeatedly.

In the present, Private and Julien both agree that Skipper made things worse, and Skipper climbs into the box with Kowalski, the trial continuing. However, Private adds that it isn't completely his fault.

In the third flashback, the penguins lock up the lab. Skipper orders Rico to activate a doomsday weapon and prepare to use the Penguin One to escape Earth, find a new home planet and repopulate the penguin species - though Private points out that they would require girls to do so. Kowalski assures everyone that he can fix this - and that the plural of Jiggles is 'Jiggli'. Unfortunately this time the Jiggli escape through the air ducts. Outside, kids are eating green Gel-O, and Kowalski freaks out, thinking that they are eating the Jiggli. But Private sees that the Jiggli are scattering around the habitats.

Back in court, Rico wanders off for lunch, Julien is writing a story about crime-fighting with a ghostly bulldozer while acting as judge, and Private has to be both prosecution and defence.

In the next flashback, Kowalski consults his abacus, estimating if the Jiggli get regular impacts daily, they'd cover Earth in twelve days. Unfortunately there are far more impacts than expected and the time-frame reduces rapidly to 24 hours. Rico proposes luring all the Jiggli together with a mountain of whipped cream, but unfortunately his plan cumulates with 'Ka-Boom' - the indestructible Jiggli are multiplied by the explosion, then start falling from the sky. Kowalski estimates that thanks to Rico, the world now has 47 minutes before "total Jigglification".

And in the present time, Private points out that was 10 minutes ago! Rico gets in the box with Skipper and Kowalski, now another defendant. Private doesn't want to electrify his friends so he gets into the box. Then the bored Julien climbs in with them.

Rico prepares to eat dessert, and is about to put whipped cream on his pie, but the others slap the can out of his flipper. Unfortunately, a tiny bit of it comes out, and the Jiggli start flooding the base. Kowalski meekly protests that of every way to die, this is the most adorable one, but Skipper's remark about "cold" comfort gives him an idea and he turns down the temperature so that the Jiggli will be frozen solid. The penguins and a booty-frozen Julien come out of the HQ, and the penguins blast the Jiggli to Mars using the Penguin One.

On Mars, the Space Squids are discussing destroying the Earth with a laser, when the Penguin One crashes on Mars. The door flaps open, and the Jiggli take over Mars instead.