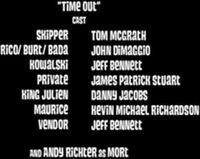 When the Chips are Down

Private is hurling beak-down through the upper atmosphere. Skipper and Rico predict that he will meet a hard impact. However, Kowalski unveils a time-stopping stopwatch, which freezes all but those touching the device. This way, he was able to move Private just before he impacted their habitat, right into the lemurs' bouncy.

Kowalski then praises his Chronal-Curbulater, but the others penguins find Stopwatch more simple. They then use it for practical jokes, such as moving Alice to get into a kissing position with Bada or stealing a snow cone cart.

When Julien sees Kowalski holding the Stopwatch, he wishes to use it to time how long the flavor of his chewing gum lasts. He has Mort go in disguised as a snow cone and steals the Stopwatch. After Julien gains possession of it and inadvertently stops and then restarts time, Kowalski attempts to get the stopwatch back, but the timepiece ultimately winds up irreparably broken, permanently trapping the two in a moment of time. Though initially frustrated by what Julien had caused, Kowalski soon uses the sudden eternity to partake in buddy activities with Julien and create 7,009 inventions.

Kowalski then inquires where Julien sticks all his gum. Julien confesses to having stuck his gum to benches, buses, the Statue of Liberty, pigeons, Alice and his Stopwatch. Shocked to hear that last one, Kowalski asks Julien when that happened. the lemur confesses that he had placed a piece of gum inside the stopwatch to dispose of it earlier when its flavor ran out. Diving into his pile of inventions, Kowalski removes it from the device and the unit becomes operational, easily undoing the time freeze.

Everyone else is confused as to what happened during the time freeze. Recalling the the gum stuck around Manhattan and the graffiti Julien and Kowalski painted on the side of the building, the penguin nervously chuckles and blows a new piece of bubblegum with Julien.