Madagascar Wiki
Register
Don't have an account?
Sign In
Advertisement
in: Lack of Information/Characters/1, Characters, Males,
and 7 more
English

He Blinded Me With Science

Viva Mort
The Really Really Big Lie
One More Cup
My Fair Foosa
Monkey Planet
The King Who Would Be King
Are You There, Frank? It's Me King Julien
King Juli-END?
O Captain My Captain Pt. 1
Close Encounters of the Mort Kind
Fast Food Lemur Nation
The All Hail King Julien Show
That Sinking Feeling
King Julien Superstar!
The Wrath of Morticus Khan
Bad-Year Blimp
Cult Fiction
Fauxsa Unchained
I Am Fartacus
For Whom the Bell Gods Toll
Out of the Foosa Pen and into the Fire
The Day After Yesterday
The Day Before Tomorrow (cameo)
Madagascar (cameo)
Julien 2.0
Spin Cycle
Tears in the Drain
Squad Goals
One More Cup, Part 2
There Will Be Juice
Blackboard Jungle
The End is Near
The End is Here

Timo is normally the one King Julien comes to when he needs something, usually something to do with technology. 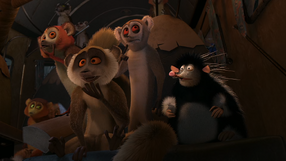 He makes his first appearance in the first movie when he rolls in a ball, freaking out when he mistakes Julien's speech for a fossa alarm.

In the series, Timo was first introduced in the episode He Blinded Me With Science of AHKJ. When King Julien thought his boombox was "dead", Timo fixed it much to Julien's happiness. Julien then took Timo back to the kingdom and showed him off to all the other lemurs. Throughout that episode, the kingdom began to use technology, which Timo provided.

He has invented lots of things, including the Mega Gecko, which eventually ended up going berserk throughout the kingdom.

Timo lives in the Cove of Wonders. Julien appoints him the position of "Royal Science Wizard".