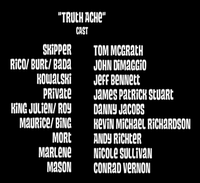 When Private mistakes truth serum for a bottle of hot sauce, all the animals in the zoo get angry when he starts spilling all they have found out from Operation Sneaky-peek: the most top-secret operation.

The Penguins have completed Operation: Sneaky Peek, in which they have spent some time gathering secret information about the other zoo animals, although Private is uncomfortable with spying on others. Skipper just dismisses his comments and they lock up a considerable amount of data. However, when Private accidentally takes Kowalski's Truth Serum (which he was keeping in a hot sauce bottle), he runs the risk of revealing all the other animals' secrets. Just then, the penguins are forced to go outside to rescue Mort, who has somehow become trapped in the rapidly filling popcorn stall. As soon as they perform the rescue, the penguins attempt to excuse themselves only for King Julien and Marlene to insist that they stay.

That is when Private starts blurting out everyone's secrets: Marlene considers herself a pop superstar and performs imaginary concerts every night, Bing sucks his thumb every night, Phil cheats at chess, Julien picks his nose, Mason is Canadian, Burt has a tattoo, Roy had a Tijuana "vacation," and Maurice makes Julien's smoothie's grosser with Mort's spit and Maurice's earwax.

Everyone starts making a grab for Private to prevent him from spilling out any more secrets - but Julien just wants to know everybody's secrets. Eventually he makes it back to their HQ, with an angry mob waiting outside. The serum wears off and Skipper tells Private, "Welcome back from la la land." after Private comes to his senses. At first, Skipper thinks to hold out in their HQ, but Burt snatches him, Kowalski and Rico and tries to sit on the Penguins, but before he could do it, Private sprays the entire zoo with Kowalski's Amnesia Spray, including the other Penguins; Burt thinks he sat on the Penguins by accident. Later on, while Skipper and Kowalski realize that they can't remember anything that's happened over the past week, Private takes a stick of TNT from Rico and throws it into vault (which he locks), destroying any and all evidence from Operation: Sneaky-Peek.