All King, No Kingdom 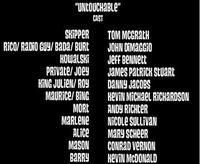 All King, No Kingdom

Barry starts taking advantage of the other zoo animals to do his bidding and Private must stop him alone.

Alice is dropping off a hazardous animal at the reptile house and is wearing a hazmat suit. The zoo animals go into the reptile house to see what it is and it turns out to be a cute little frog transferred from Hoboken Zoo. Private, thinking Barry to be lonely, releases him from the habitat. However, as soon as they do, Barry starts giving orders and making demands. They don't take him seriously until he shows them how poisonous he is by paralysing Rico with a single touch.

Back at the penguin headquarters, Kowalski points out that Barry is a Poison Dart Frog whose skin is drenched in paralyzing poisons. Private is sad because he can't touch Barry to give him a hug. Meanwhile, Barry is terrorizing all of the other zoo animals. He makes the chimpanzees give him bananas. He makes Burt suck them up with his trunk and shoot them at the chimpanzees for his amusement. King Julien sees this and doesn't like it because he is supposed to be the one giving orders.

The penguins trap Barry under a glass but he digs his way out, infects Kowalski and escapes. Skipper and Private go back to headquarters and retrieve Kowalski's secret project, the Six-Foot Whacking Stick made out of bamboo. Private asks if there isn't a peaceful solution, and Skipper agrees that there probably is... but he wants to try out the whacking stick.

Meanwhile, Barry is at the gorilla habitat making the gorillas have a tea party when King Julien comes and tells him who is boss and tells him that he can apply for an internship. As soon as Barry tries to pounce on them, Skipper whacks him out of the air with the stick. While avoiding getting whacked, Barry latches onto the stick and slides down it. A chase starts and eventually Barry catches up to Skipper and infects him by jumping on his face.

Private goes back to the headquarters to try to think of ideas and when he sees Mort playing with empty bean cans, he gets an idea and builds a tin robot suit that entirely encases him. Barry tries to touch him but the poison does nothing against the suit. Private catches Barry and finally gives him the hug that he thinks Barry needed. Barry enjoys the hug for a second, saying that it's just what he needed - before suddenly swinging back to his more cynical mindframe and saying that maybe he's just a jerk who likes bossing people around. Private finds no problem with that and tells the frog that then he'll squeeze until Barry pops. After a few moments of being squeezed, Barry agrees that the hug really is very nice and becomes far more pleasant.

The rest of the team wake up to see Barry playing checkers against Private, who is wearing his robot suit. Skipper says, "We're dreaming," and they go back to sleep.