Madagascar Wiki
Register
Don't have an account?
Sign In
Advertisement
in: Episodes, Episodes focusing on Lemurs, The Penguins of Madagascar Episodes 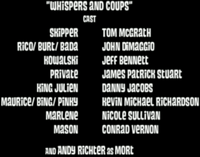 The All Nighter
Before Christmas

King Julien believes Maurice is plotting an overthrow and the penguins send him through basic training.

The episode begins with the penguins conducting training before sunrise. While King Julien sleeps Maurice sneaks off. King Julien awakens to find his right-hand man gone and sets off in search of Maurice. Maurice is seen conversing with the other animals, planning to "blow King Julien off his throne". King Julien sees this as a revolution and dons a pink military uniform. King Julien begins training with Mort by throwing coconuts at a dummy. King Julien accidentally picks up Mort, whom is wearing a coconut on his head, and throws him into the penguin habitat. King Julien suggests Maurice is planning a revolution and the paranoid penguins have the nerve to scoff at him. However, once the penguins see evidence support King Julien's claims of revolution they prepare for this threat by sending him through basic training to "squash the love right out of [him]". Afterward, the penguins, King Julien, and Mort arrive at an empty habitat which Maurice and the others have prepared with Tiki torches and pitch forks. After the penguins attack the other animals Maurice reveals that it actually is a surprise party. King Julien has a flash back to a surprise party on his actual birthday where he tells Maurice it would actually be a surprise if it wasn't on his birthday. He also said that it should be hillbilly Tiki themed. When Private asks why they weren't invited, he also has a flash back to King Julien's party where Skipper asks Maurice to not invite them. Julien stops him and invites him to his "not hillbilly Tiki surprise party" for teaching him to be an officer and a gentleman. Skipper repays him by ordering Julien to "drop and give me twenty!" and Julien uses Mort to help with the push ups.