Madagascar Wiki
Register
Don't have an account?
Sign In
Advertisement
in: Lack of Information/Characters/3, Unsourced quotes, Characters,
and 8 more

Unnamed, mentioned family that had been feuding for 10 generations.

Julien 2.0
Spin Cycle
Night Creatures
Tears in the Drain
Squad Goals
One More Cup, Part 2
There Will Be Juice
Blackboard Jungle
Lord of the Fruit Flies
Karl-Mageddon
King Julien is Watching You
The End is Near
The End is Here

Willie is a lemur who appears in the film Madagascar and the Netflix series All Hail King Julien. 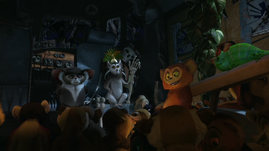 Willie's first canon appearance was in the episode "King Me", as one of the lemurs rescued from the fossa by King Julien. In "Poll Position" he is given the title of Captain of King Julien's first navy ship named Old Porceleinesides. However, Willie's first official appearance was in the first movie, when he was the only lemur that was referred to directly by name by King Julien, when he was to say his opinion about the New York Giants. Unlike his character in AHKJ who shrieks, "We all are gonna die", when something new comes, he says he likes them.

He was imminently distraught by the fact that the ship he was to captain didn't look very seaworthy. Still, with some motivation from Maurice (who poked him with a stick to get him to move towards the boat), he gave in and accepted the honor. His worries about the boat being unseaworthy were confronted later in the episode when the boat starts sinking, with the vessel not even making it out of the Cove of Wonders where it was released. He was later seen in the episode being attacked by very aggressive dolphins while the boat was sinking. When he got angry with King Julien for putting him in this predicament (the sinking ship), he let himself be bribed with the mangoes King Julien was sharing to increase his popularity. After catching the mango, he screams "You're the best, King J!" He was either very lucky, able to swim, or rescued from the water by Clover, as he appears in the next episode in which he celebrates Franksgiving in the honor of the sky god Frank. He once tried to smuggle in more than one wishing stone in the balloon, something which he is called out for by Maurice.

Willie is a quite hyper and fearful. However, he can be very tough and aggressive if he's armed with dangerous weapons. Willie does have some immature moments throughout the series, like when he mischievously called out Dorothy for not wearing a diaper. He is also known to spark hysteria in the lemur kingdom, usually when screaming "WE'RE ALL GONNA DIE!" When he screams his signature phrase, citizens of the kingdom will often begin to panic as well. He will, however, sometimes scream this when panic is currently happening. Like a lot of the others, however, Willie is a very fun-loving lemur.

King Julien: King Julien is sometimes irritated at Willie's "WE'RE ALL GONNA DIE!" habit, and he sees him as tragically paranoid. Despite this, he does seem to cares for Willie, like he does with many of his other subjects, and he even went as far as bursting into tears when Clover mistakenly told him Willie drowned. Julien also has a propensity for picking on Willie. For example, when listing things that have been bad happening to the kingdom, he also lists Willie. When finding a place to store mangoes, King Julien lists Willie's hut. Willie responds with, "What the heck, man?!"

Mort: Willie seems to like Mort, as he enthusiastically applied to be his roommate in Oh Brother Where Aren't Thou? and when he caught and affectionately held Mort in Un-King Me after Mort got thrown over the prison fence.

Ted: Though not much interaction is shown between Ted and Willie, they seem to be friends as they are often shown next to each other and sometimes spending time together.