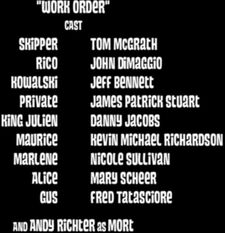 A devoted Russian repairman comes dangerously close to destroying the world when repairing the penguins’ habitat.

It is a wonderful spring morning when Marlene wakes up. She then notices an owl egg about to fall from its nest into a tree shredder. Luckily, Private and Rico swoop in in toy airplanes and save the egg in time for its hatching. Skipper pops up to assure Marlene that they have been staking out all eggs in the park for "Humpty Dumpty" scenario since the beginning of spring. He tells her a saying he uses, "There's only one way to do the job, the right way. My way."

Unfortunately, Private accidentally crashes his airplane into a water main underneath the penguins' habitat, causing water to erupt from it. Alice takes notice and summons a repair man, Gus, whose efforts to repair the leak threaten the secrecy of the penguins' HQ. Gus tells Alice that he and his "boys" (his arm muscles) will have to dig about four meters straight down and promises to start tomorrow.

Taking up temporary residence in Marlene's habitat, Kowalski gives a brief bio about Gus. When Private mentions that Gus eats a liverwurst sandwich everyday for lunch, Skipper says that all he needs to hear. The penguins work all night to repair the damage, leaving a sandwich for Gus so he won't get suspicious and tell someone. However, Gus refuses to take credit or payment for repairs he did not do and is determined to perform the service he was hired for. He tells her, "There is only one way to do job, the right way," promising to be back the next day. Hearing this makes Skipper's eye twitch.

Kowalski determines that though Gus may miss their HQ if he digs four meters straight down, he'll hit the penguins' thermonuclear fusion reactor core. If the reactor were to be breached or cause a meltdown by overload, theoretically, it would cause an explosion powerful enough tear a hold in the fabric of time and space (given that Kowalski & the others mentioned they mixed in other sources of matter such as dark & anti-matter). Skipper mockingly repeats Gus' phrases, his movements nearly identical to a video footage of Gus. Marlene says that Skipper is nearly Gus' reflection, Private tells her to take it back, saying that Skipper is much more stubborn and pig-headed than Gus will ever be. Skipper thanks him for that and vows that he will prove it.

The penguins proceed to sabotage Gus' machines and work tools, but it only compels him to dig with his bare hands. They then unleash a burst of loud music, heat, cold wind, fire, earthquake and plague of snakes, but none of these schemes deter Gus and his "boys" from their task. Skipper despairs that he has failed as Kowalski states that Gus will breach the reactor by next morning. But then looking at the camera monitors, Skipper has an idea.

Next day, Gus makes it to the last stage of the dig, with Marlene going into a reactor. But instead of rupturing a reactor, Gus finds what he's suppose to find: a damaged pipe. He repairs it and leaves. Marlene expresses confusion, before discovering that the penguins have created a fake zoo set-up in the park. Skipper boasts to Marlene that this is how they do the job: the right way, his way.